Ken Early: Quality of Pochettino’s process speaks for itself 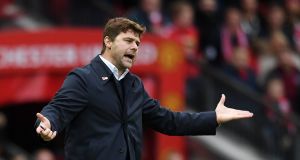 Tottenham manager Mauricio Pochettino: “When he senses the players are getting a little stale, he likes to remind them that they all started playing the sport not for money or fame, but for love.” Photograph: Armando Babani/EPA

Half an hour after Spurs had lost to Manchester United, Mauricio Pochettino was invited to blame the defeat on Harry Kane’s absence.

“If Dele Alli scored before we conceded, maybe now the question would be different,” he replied. “It’s always about the result in football.”

This is a theme Pochettino touches on in his new book with Guillem Balague, Brave New World: Inside Pochettino’s Spurs.

He considers some comments by Pep Guardiola and Carlo Ancelotti, who agree that “the result is an empty thing” and that as managers, what they really care about is the process.

Pochettino isn’t sure about that.

“Sometimes we change our tune depending on the situation. Like a rich person proclaiming that money can’t buy happiness, we tend to fall into the trap of saying that trophies aren’t important . . . except when we win them . . . I take pleasure in the journey . . . But we all play to win; anyone who says otherwise is lying.”

We know that Jose Mourinho’s vision of football is never mind the process, feel the results.

At the end of a game in which United had been outplayed yet won 1-0, Mourinho turned to a camera and put his finger to his lips to shush all the losers and haters out there. It was a quintessential Mourinho moment; he truly, sincerely believes that winning the match makes the poor football irrelevant.

Pochettino has some of the energy and charisma of the young Mourinho, but there’s one obvious difference between them. Pochettino is now into his tenth season as a manager. He has been Premier League Manager of the Month four times, but he has never won a trophy as a manager.

It’s an enduring sore spot with Jose Mourinho that he has only won Manager of the Month three times, but by the time he was into his tenth season as a manager he had won 11 major trophies, including the league title in three different countries and the Champions League.

Tottenham have been the best team in the Premier League for two years, with more points than any other team since October 2015. The question is whether they will ever have anything to show for it.

The fact that people now think of them as a top team creates its own problems. You succeed, and what was once success becomes baseline expectation.

After the match on Saturday, TV stations trumpeted that Pochettino has taken only nine of 48 points from away matches against the other top six clubs. The fact that the top six was a top five before Pochettino came along was not mentioned.

His diary is chiefly interesting for the light it sheds on how Pochettino stokes Spurs’ feverish levels of motivation. Playing for his team is a demanding business. Sometimes even Pochettino wonders if he’s asking too much.

“I asked Jesús [Perez, Spurs’ assistant manager] if he thought that maybe we were putting the players under too much pressure, knowing that many of them are already giving their absolute all. ‘Maybe they have no more to give, but without pressure, they’d give less,’ he answered.”

Pochettino has a reputation for being hard and ruthless –- “which I feel is actually a positive attribute in Anglo-Saxon culture”.

It’s certainly true that he is not afraid to show anger, but the picture that emerges from his diary is more complex. He draws a distinction between “leaders” and “bosses” – the boss being the old-school type of authoritarian who fines players for being late, etc.

Pochettino says he has never punished a player for being late; he prefers to “talk it over” with them. You suspect a lot of players who have talked over their lateness with Poch would gratefully pay any fine to avoid having to have another of those conversations.

It’s plain that Pochettino has a much more personal relationship with his players than most managers. It starts with individual attention. Harry Kane remarks that when Pochettino first arrived, he took time to meet every player, even the young ones, whereas many managers “just want to know the leaders”.

He spends hours in his office chatting with players one-on-one and has even been known to take them out to dinner.

“Every morning he goes around shaking everybody’s hand and you can see when he’s doing that that he’s looking into your eyes to see how you are that day” says Danny Rose, who also describes Pochettino as his “best friend” at Spurs.

When he sees glum expressions he will tell the player to turn that frown upside down, because he believes negativity is contagious. He also believes he can divine the energy fields around people, and keeps a bowl of lemons in his office to cleanse the room of negative energy. Well, if it works for him . . .

He seeks to tap into the deep wells of motivation that are within us, often without us realising it. He says he keeps a photo of himself as a young boy, happy and holding a ball, and looks at it when he needs to remind himself of why he is who he is. Appealing to the inner child was a technique Alex Ferguson used to use before big games, and it’s one Pochettino uses often.

When he senses the players are getting a little stale, he likes to remind them that they all started playing the sport not for money or fame, but for love.

“It takes players deep into their consciences and they each go back to a certain point in their past. You don’t know exactly where – they may remember playing with their father, friends, or starting out in Denmark or Argentina – but it takes you to a reunion with a younger version of yourself; the kid who loved football and the person you are now become one again. When that happens and they go back out to train, they’re enjoying themselves again, laughing, running around and making a momentous effort. They’re more aware, receptive and open to what they’re told.”

Pochettino might never win the league at Spurs. To do that he needs to be lucky as well as good. But the quality of the process speaks for itself.