McCarthy not losing the run of himself after New Zealand win

‘Will it have any impact on the way we play against Denmark? I’m not sure’ 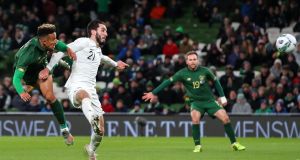 Mick McCarthy shrugged off what he felt was an attempt to attach too much importance to what had transpired in this 3-1 win over New Zealand but he wasn’t denying that it was something good, something to be welcomed on the eve of a Euro 2020 qualifier against Denmark that may well come to define his second spell in charge of Ireland.

“Four full debuts,” he said, “four new players who have all been involved with a win. Three players have scored the first international goals . . . Will it have any impact on the way we play against Denmark (next Monday)? I’m not sure. But I think it will make a difference to the way that people will perceive the team and any positivity can only be good.

“I’m satisfied,” he said. “I thought we played some decent football in the first half although I could see their goal coming because we had a lot of the ball without doing anything much with it really. We were better in the second half and it could have been more in the end.”

Troy Parrott, he felt, had done well enough given his age and inexperience. “He didn’t set the world on fire,” said McCarthy, “he didn’t tear it apart but I thought he did okay. He can handle himself. I didn’t doubt that and it was good to see him tracking back and tackling their centre half (Winston Reid).

“He (Reid) got a bit upset about the challenge, I know he’s been out for a while and you don’t want to see players getting injured but it was good for Troy. He’s made a point there. Welcome to men’s football because then he was getting a little bit bullied by the defender but he stood up to it.”

Alan Browne and Josh Cullen were among the players to receive praise from the manager, Kevin Long too for the way he coped despite having had so little club football recently, although he seemed especially pleased with two of the goalscorers, Sean Maguire and Derrick Williams.

“I thought Derrick was excellent,” he said “He had his chances and I was delighted he got his goal.”

Parrott, meanwhile, clearly enjoyed his first exposure to the game at this level.

He acknowledged that he too might have might have got in on the theme of the evening by grabbing his first international goal but the 17 year-old was still pleased with his performance on a night that might well end up being remembered at some stage in the future for being the start of his story with the senior team.

“I felt like I did well,” he said. “I had a couple of chances and could have taken them maybe but I thought that I did well. I enjoyed the all round occasion, though, not any one thing in the game . . . just being out there in an Ireland shirt, it’s everybody’s dream.”