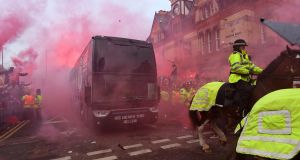 Manchester City have sought assurances from Liverpool of a safe passage to Anfield for the potentially pivotal title match on Sunday, with the champions flagging up a social media post asking fans of the Merseyside club to line the potential route of City’s team coach.

City are concerned the coach could be attacked by Liverpool fans as it was in April 2018 before the Champions League quarter-final when bottles, cans and flares were thrown. Although no players or staff were injured, the vehicle was left unsafe to drive.

While the clubs are in constant dialogue in the buildup to the game – as is normal practice – it is understood the problem has been raised at executive level by City. They expect it to be taken seriously and want a guarantee from Liverpool there will be no repeat of the scenes of 18 months ago.

The post in question, headlined Liverpool vs Manchester City, asks supporters to “bring your pyro[technics], pints, flags and banners” and “line the streets all the way up Anfield Road and to the ground”.

A similar message was also in circulation before last season’s corresponding league fixture, the 0-0 draw in October, and there was no trouble. City, though, are wary. They are intent on not revealing their route to the stadium, with Liverpool and the police also keeping the information private.

A Merseyside police are not expecting any specific trouble on the day, though this could change as the fixture moves closer. City were left bemused when no arrests were made over the bus attack at the Champions League match, which Liverpool won 3-0.

Pep Guardiola’s team are six points behind Liverpool in the Premier League and are conscious defeat would leave their hopes of a third consecutive title remote. Yet Fernandinho believes they can reverse recent history and end a run of 16 years without a win at Anfield, their last victory coming in May 2003, a 2-1 win in which Nicolas Anelka scored both their goals.

The Brazilian said: “There’s always a first time in the life, no? We are searching for this first time to win [in a long time] at Anfield. I am confident we can go there and try to win the game.

“The mentality is always try to win the game. Of course, we will see with Ederson’s situation. We are going to train and the medical staff are going to check him and we are going to see if he will be fit.”

City are hopeful Ederson will recover in time from the thigh muscle injury that caused him to be replaced at half-time of the 1-1 draw with Atalanta at San Siro on Wednesday. His replacement, Claudio Bravo, was sent off nine minutes from time, forcing Kyle Walker into an action as an emergency goalkeeper. - Guardian