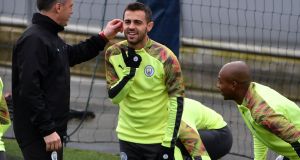 Manchester City midfielder Bernardo Silva has been suspended for one match, fined £50,000 and must complete face-to-face education following a tweet he sent to team-mate Benjamin Mendy. Photograph: PA Wire

Manchester City’s Bernardo Silva has been suspended for one game, fined £50,000 (€58,000) and must undergo education after a tweet sent to Benjamin Mendy was deemed to have constituted an “aggravated breach” of the Football Association’s rules on social media behaviour because it appeared to reference the French left-back’s race.

City will not appeal against the independent FA commission’s decision because of the possibility that Silva’s punishment could be extended, though the club believe the tariff is too high considering he deleted the tweet almost instantly and apologised.

Silva escaped the maximum penalty of a six-match ban and will miss the champions’ hosting of Chelsea on November 23rd - their next fixture. The Portuguese was given a one-match ban due to the mitigating circumstances articulated in the commission’s ruling.

The message posted on Twitter on September 22nd featured an image of Mendy next to one of the mascot for the Spanish confectionery firm Conguitos.

An FA statement said: “The Manchester City midfielder’s social media activity on 22 September 2019 breached FA Rule E3(1), as it was insulting and/or improper and/or brought the game into disrepute, and constituted an ‘Aggravated Breach’, which is defined in FA Rule E3(2), as it included reference, whether expressed or implied, to race and/or colour and/or ethnic origin.”

The commission also laid out the mitigating factors taken into account. “The player did not have any knowledge of the historical connotations of the Conguitos character. His tweet was not intended by him to be either racist or offensive in any way. The tweet was promptly deleted by the player. The player and his club have taken steps themselves to ensure that the player has a greater understanding of his responsibilities on social media.

“The player made an early admission in full cooperation with the disciplinary process. The player has an exemplary character and disciplinary record.”

Kick it Out, the organisation that campaigns for equality in football, said it accepted the outcome and the FA’s drive for education. In a short statement on Twitter it said: “We accept Bernardo Silva’s admission that he did not mean to intentionally cause offence, and welcome the FA’s move to provide education as part of the sanction.”

Mendy, who is a good friend of Silva, had written to the commission to make it clear he took the tweet in the spirit intended by the player. On the same day as the tweet in question, Silva posted: “Can’t even joke with a friend these days … You guys …”

The City manager, Pep Guardiola, defended his player. “Bernardo is one of the most lovely people I have ever met in my life,” he said on September 25th. “He speaks four or five languages - that is the best way to understand how open-minded he is - and one of his best friends is Mendy. He is like a brother for him. The image for the two is not about the colour of the skin.”

Silva’s suspension is a further blow to Guardiola as the manager has lost Aymeric Laporte and Leroy Sané to long-term injuries, while Mendy, David Silva, Oleksandr Zinchenko and his first-choice goalkeeper, Ederson, were all ruled out of the 3-1 defeat at Liverpool on Sunday. The loss left City nine points behind Jürgen Klopp’s team, 12 games into their title defence. - Guardian