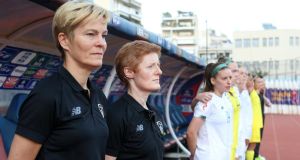 Vera Pauw has made an impact everywhere she goes. The former Dutch player and current Irish manager ensures that not only does her team put on an excellent performance to try and get the result, but she also ensures the game is in a better state than when she arrived.

Take Scotland as an example. Pauw joined Scotland as a manager after her husband became assistant manager of Rangers. She took control at a time when the Scottish FA had taken over running women’s football, looking to promote it and bring it to the next level.

Pauw brought over 60 organisations to the table, at a time when no women’s sporting organisation wanted anything to do with each other. Craig Brown, director in the Scottish FA, knew Pauw commanded respect everywhere she went. After making Dutch women’s football famous as a dominating sweeper when Johan Cruyff made tiki-taka a world phenomenon, Pauw immediately united every aspect of the Scottish women’s football organisations.

Pauw was the technical director as well as the manager and was backed by lottery funding, and left some strong foundations for women’s football, having increased participation rates six times. But, bigger opportunities lay ahead in her home country.

The Netherlands were looking to grow their game even more and called on Pauw to help them lay stronger foundations and put together a team, and a youth structure, that would ensure stability and success for later years. The results came soon.

After scrapping boys and girls teams at youth level, ensuring all clubs were associated with a men’s team, paving the way for superstars like Lieke Mertens, and Danielle van de Donk, Pauw made the Euros 2009 in Finland. Despite reaching a semi-final and bringing Dutch football to a higher standard, the greed and egos soon left Pauw and co in the cold.

It wasn’t long before she left her mark on another national team. When South Africa asked her to join up with the squad, it was a challenge like no other. Pauw dealt with animosity towards the women’s team, scrappy conditions and an FA that didn’t care. Players would pay to play, often having no money to feed themselves.

But Pauw and her team hit a once in a lifetime achievement – bringing South Africa to the 2016 Olympics, after beating Equatorial Guinea 1-0 away in a mammoth game. Sure, some would sneer and say it’s all well and good getting to the Olympics, but with the newfound exposure and the chance to play against the world’s best, South African girls had something to aspire to. Once again, Vera Pauw was making it possible.

And now, with the Republic of Ireland national team, the FAI have put in place someone who can take this team to higher standards, while also implementing change at grassroots level too. Yes, the FAI is in a state financially, but seeing the women’s game actually being given its real value can make the biggest impact.

Over the past weekend, we have seen the potential growth of the women’s game throughout Europe. With record attendances at the top clubs across Europe and the English women’s national team reaching 77,000 at Wembley in their 2-1 loss against Germany, the main takeaway is this.

You can have a coach like Phil Neville and hope he’ll use his contacts and build an empire on shaky foundations, tactical imbalance, radical tactics and on the off chance you’ll bring in record-breaking attendances once every four years. You can have eyebrow-raising quotes that grab headlines because they are similar to David Brent from The Office.

Or you can put your money where your mouth is and grow the game organically, with a solid foundation and a manager who has a superb reputation at moving the game forward on every level.

Off the back of a successful FAI WNL and Cup final, you can see how Irish teams are shaping up in the future. When superstars like Denise O’ Sullivan, Louise Quinn, Megan Campbell and Katie McCabe merge with talents like Rianna Jarrett, Leanne Kiernan, Tyler Toland, Keeva Keenan and Amber Barrett, the future is bright.

Pauw and her assistant Eileen Gleeson will sharpen up the defence after an admitted horror show against Ukraine, and hopefully, the goalkeeping errors can be put down to coaching, but the Irish team could be building for a bright and robust future.

While Phil Neville continues to tell everyone we are lucky to have him, the FAI are really the lucky ones to have such experience, commitment and respect among their coach. Pound for pound this Irish team have a bit to go, but with the precedent Pauw has left behind her, and with Eileen Gleeson directing in the wings, it looks like the FAI have a new dream that will not go south any time soon.