TV View: All white on the night for Ireland 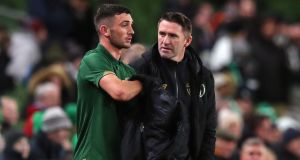 It all worked out grand in the end, but let Thursday night be a lesson to all of us, especially Jim Beglin - never, ever chortle at the quality of teams that come to Dublin to play us, even if they haven’t had a game in 520 days, are ranked below Mozambique, Tajikistan and Sierra Leone and have a side made up largely of players who look younger than the mascots accompanying them on to the pitch.

It would be harsh to blame Jim entirely, but still.

28:33: “I think Danny Hay, the New Zealand coach, knows as he’s watching this he has a long way to go in terms of snapping his team into something far superior to what we’re watching. In terms of getting in to the opposition half, there’s a lot to be done.”

29:33. New Zealand get in to the opposition half and score.

There was still an hour left, so there was no need to panic, but Callum McCowatt had kind of become our Davide Gualtieri.

Almost no one remembers that England actually won 7-1 back in 1993, all they recall is that Gualtieri scored for San Marino after 8.33 seconds. Clearly, there’s something about .33 of football seconds when it comes to being left mortified by teams ranked below Mozambique, Tajikistan and Sierra Leone.

Pre-match, the bulk of the chat focused on Troy Parrott starting his first senior international, Jim popping up on the Six O Clock news to insist we shouldn’t put too much pressure on the young fella before pointing out that he’s the first natural finisher we’ve had since Robbie Keane. Miles apart

Damien Duff was having none of that class of talk, though, when the build-up got under way over on RTÉ2 and Darragh Maloney asked him, in so many words, if Troy was Robbie the Younger.

“I played against Robbie. I was close to Robbie when he was 17. Trust me - they’re still miles apart.”

Damien, then, had found his inner Lloyd Bentsen (ask your Ma and Da), stopping just short of adding: “Darragh, I served with Robbie Keane. I knew Robbie Keane. Robbie Keane was a friend of mine. Troy Parrott? You’re no Robbie Keane. (Not yet, anyway).”

Pitchside Tony O’Donoghue was sounding a couple of gloomy notes, firstly pointing out that “there’s hardly anyone in the ground” and then sounding a warning to those who thought we might put 46 past the visitors as revenge for Tokyo. “We’re a side who struggle against the likes of Gibraltar, so…..”.

Off we went and not for the first time George Hamilton displayed his spookily intimate knowledge of the backgrounds of referees - “he’s the man who called off Bohs’ IRN-BRU Cup quarter-final against East Fife in February because of a frozen pitch” - while Jim focused his thoughts on New Zealand’s right-back Storm Roux. “He sounds like a pop star, doesn’t he? Or a sauce.” George didn’t respond.

Anyway, apart from the somewhat calamitous concession of that goal, which could well see Jim dropped for Monday’s all-or-nothing tussle with Denmark unless he pledges from this day forth to stick with ‘there are no easy games in international football’, the game was actually a bit decent, Seanie Maguire, Jack Byrne and Josh Cullen in particular proving that there’s nothing in football’s rules that says Ireland can’t play rather attractively and actually pass the ball to one another.

And lifting the mood further was Derrick Williams’ equaliser before the break, which left it all to play for in the second 45. “In that kit tonight,” said Jim as we got under way again, “Ireland look like a bunch of nettles - we just need the sting in the second half.”

And with that, Maguire grasped the nettle, so to speak, with a very delicious goal, before Callum Robinson headed home a Lee O’Connor cross so delectable his right foot needs framing.

Denmark next, then. All we can hope is that our bunch of nettles will sting the bejaysus out of them. But they’re ranked above Mozambique, Tajikistan and Sierra Leone, so one thing we know for sure, it won’t be an IRN-BRU Cup quarter-final against East Fife.