Ireland make it a night of firsts against New Zealand 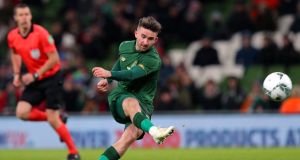 Sixteen attempts it took the Irish rugby team to beat New Zealand in Lansdowne Road. Here, Mick McCarthy’s men managed it very first time. Not that we are in much of a position to brag as a nation after more recent events, but Ireland is suddenly on an inter-code run of two on the trot against the Kiwis at the place.

This, of course, will not go down as the most memorable sporting encounter between the two countries with the two sides producing a gentle night’s entertainment on a cold night for those supporters who braved it but a good one for the team.

If all of Ireland’s opponents played with this sort of intensity, needless to say, the perception of the team abroad would be rather different and Monday’s game here could be approached with a good deal more confidence.

In this game, they dominated their opponents, having more of the ball and constantly seeking to use it to good effect, something they rarely seem to retain the composure to attempt when facing tougher sides for higher stakes.

A softly conceded first half goal by Callum McCowatt aside, though, there was a fair amount for McCarthy to be happy with over the course of the 90 minutes, even if it is not entirely clear how much he might have learned that will be of immediate use to him.

To judge by the manager’s comments beforehand we, at least, have learned that Robbie Brady is less likely to start against the Danes than had seemed the case at the start of the week. McCarthy had suggested that the Burnley midfielder would be withdrawn well before the end if he was going to feature from the outset in the critically important qualifying game. Still, the midfielder did enough in this game to suggest he can contribute to the bigger occasion if he is given the opportunity as he most likely will be. It will just, it seems, be that bit later in the evening.

Denmark, though, will be a rather different proposition. The All Whites only came together this week for what was their first game in 18 months and got to train twice before it. If their counterparts in black had had a build up like that, the World Cup quarter-final last month in Chofu might have produced a very different story.

Given the circumstances here, in fact, Daniel Hay will probably be happy enough too as heads off to Vilnius where his side will make an 18th attempt to beat another international side on European soil for the very first time.

They were far from comprehensively beaten, although the hosts did look the better side throughout and much the better one towards the end. Derrick Williams, Sean Maguire and Callum Robinson all got their first international goals, with a couple of them potentially important boosts for strikers who already had a few games under their belts.

Having started, Maguire did particularly well overall, especially after scoring. Before it, though, he had won the corner late in the first half that led to Ireland’s equaliser - Williams rising highest to head home a good delivery by Brady - and he almost set Troy Parrott up for one too with a simple looking but effective pass that left the teenager one-on-one with the approaching goalkeeper. Much as Maguire had in not dissimilar circumstances much earlier, the Dubliner simply drove the ball straight at Stefan Marinovic then looked like a man who knew he really should have done better.

It was a debut full of promise for the young Tottenham player, though. Along with Williams, he had a big hand in Ireland’s second with the pair harassing, a little unfairly it seemed, but who is complaining, McCowatt into coughing up the ball on the edge of the New Zealand area then playing it square for Maguire who put it away with real conviction.

The 17 year-old’s physicality had been a factor all night and he showed, as Giovanni Trapattoni would doubtless have put it, great personality. His other great chance to score was cut short by the referee calling back play for what looked to be a head injury to Kevin Long but there was plenty here to suggest he is one who will make his mark in the future.

Some of his interchanges with Jack Byrne suggested that their on-field relationship could develop into something a little special if it is allowed to. They each picked the other out well on occasions, especially in the first half and the Shamrock Rovers midfielder might have had his first international goal had he been aware, as he prepared to strike an angled cross by his young team mate, that Sarpreet Singh had tracked back and was about to come between him and his shot.

Byrne, though, looks like a man who could get used to these surroundings. Again, the pace of it all may not have to done too much to persuade McCarthy that he could really make the same sort of impact on the bigger, more hard fought occasions but the midfielder can only do what he does - tirelessly look for the ball then use it well, often with a sense of invention that Irish sides so often lack, against the opponents put in front of him. So far he has passed the couple of tests McCarthy has set for him.

No one failed here, however. Robinson’s goal late on, a close range header after a cracking cross by Lee O’Connor, rounded off a good night but Kieran O’Hara and Mark Travers both made a couple of saves each and Alan Browne was an influential presence. It matters little alongside what happens on Monday, of course, but the mood will be good as that game approaches and that, hopefully, will count for something.

1 Exiled Seán O’Brien not ruling out a third Lions tour
2 PSG break quarter-final curse with stunning injury-time victory
3 Bundini Brown: The man who invented ‘float like a butterfly, sting like a bee’
4 Paul Clarke steps aside from Dublin role
5 Seán Moran: It won’t take much before cancelling All-Ireland looks like a solution
Real news has value SUBSCRIBE
Crossword Get access to over 6,000 interactive crosswords