Ireland’s second-string impress, but can they force their way into Denmark reckoning? 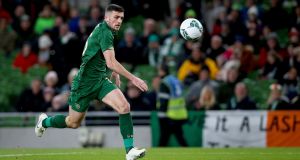 An assured full debut from O’Hara, who stayed alert after a quiet opening and made a couple of sharp saves in the second-half. Couldn’t have done much about the goal. Rating: 7

A fine performance, given this was his first ever senior start at international or domestic level. Provided plenty of width and his delivery for Robinson’s header, on the run, was superb. Rating: 8

It was a comfortable evening for Ireland’s centre-halves - Long was tidy defensively and smart in possession, playing one fine ball down the inside right channel to Maguire in the first-half. Rating: 7

The Newcastle centre-back was able to ease himself gently back into the international arena. Unable to get a touch on Cacace’s cross for the goal but solid throughout. Rating: 7

Williams found plenty of space on the left but couldn’t make it count, spurning two good chances at the back post. However, he made up for it with a fine headed goal and astute defensive cover. Rating: 7

The pick of Ireland’s midfield triumvirate, he was constantly on the ball and trying to dictate the tempo, always quick to switch the play for Ireland’s fullbacks who kept their width. Rating: 7

Seemed eager to make an impact from the outset, popping up all over the pitch showing for the ball. He has a lovely, low centre of gravity but drifted a bit before his withdrawal on the hour. Rating: 6

A perfectly neat and tidy showing from Browne, who showed a nice range of passing whether operating deeper or further forward. Will have tougher assignments at this level. Rating: 6

Brady looked off the pace as he tried to force himself into the reckoning for Denmark. Failed to track his man for New Zealand’s goal and was occasionally lax in possession. Rating: 5

Often isolated but showed flashes of his prodigious talent, never shirking the physical challenge and holding the ball up well. Missed his golden chance before the hour mark - still, it’s a good start. Rating: 7

Huffed and puffed and hassled and harried, missing a couple of chances in the first-half before opening his Ireland account in the second with a stunning finish. He was electric afterwards. Rating: 8

Callum Robinson terrorised New Zealand after replacing Parrott - he scored his maiden goal for Ireland and could have had a hat-trick - while Mark Travers made a fine save from point-blank range at the death. Rating: 7

McCarthy was patient and gave his youthful side the time to turn the game around before making changes, but ultimately he won’t have seen enough to change his plans for Denmark. Rating: 7