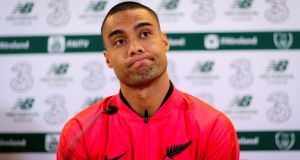 Winston Reid: “I’ve been fortunate enough throughout my career not to have too many serious injuries. Unfortunately I caught one 18 months ago.”

Winston Reid has joked that his wife wants to “kill him” as he prepares to return from an 18-month injury nightmare.

The 31-year-old West Ham defender has been sidelined by a knee injury since March last year, but is poised to pull on his boots once again in Dublin on Thursday evening as he captains New Zealand in their friendly clash with the Republic of Ireland.

That will end a saga which has gone on far too long for his liking, and apparently that of Mrs Reid. He said with a smile: “It’s been a long time - I think my wife wants to kill me at this point.

“I’ve been fortunate enough throughout my career not to have too many serious injuries. Unfortunately I caught one 18 months ago.

“It’s been a while since we’ve been in camp together. Probably the last time I’ve been involved was Peru a couple of years ago.

Reid’s period of inaction has been very nearly matched by his international team-mates with the All Whites not having played a competitive fixture for 525 days.

The intervening period has been one of turmoil with the New Zealand Football Association undergoing significant change, prompting the departure of coach Fritz Schmid and the appointment in his place of former Leeds defender Danny Hay.

The 31-times-capped former international has had just a few days to work with his players ahead of the game at the Aviva Stadium and Sunday’s trip to Lithuania, and he admits that the result against Mick McCarthy’s men is largely irrelevant to him, with World Cup qualification the long-term aim.

He said: “Look, for me I’m parking the result, the result I’m putting to one side. This is all about preparing for 2022 and beyond, actually, for us.

“Like I said, with only two days’ training, we can’t expect miracles. I guess the saying Rome wasn’t built in a day is very much in line with what we’re going through.

“We’ve got to be realistic about what’s going to happen tomorrow. There are going to be times when the players make mistakes, but we really want to come away from tomorrow’s game and the one against Lithuania having a really good idea about the character, mentality, our level of investment and the ability to play within the style of play that we’re trying to implement around every single player.”

Burnley striker Chris Wood did not train on Wednesday because of a knock, and Hay insisted he would not take any risks with his players.

1 Gordon D'Arcy: Ireland must go after victory by frightening France into mistakes
2 Henshaw the only change as Andy Farrell names Ireland team for Paris
3 Champions Cup draw: Connacht drawn with Pat Lam’s Bristol and Simon Zebo’s Racing
4 Cian Healy: ‘Realistically I got away with murder when I was younger’
5 Giovagnoli’s appointment at Dundalk ‘a great story’ says Arsenal boss Arteta
Real news has value SUBSCRIBE
Crossword Get access to over 6,000 interactive crosswords