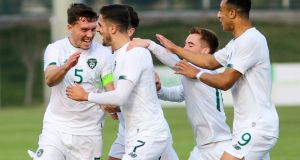 There was an element of risk to Stephen Kenny’s strategy of congesting seven qualifiers into a seven-month period but heading into the eighth and final fixture of 2019 on Tuesday against Sweden, they have soared to the summit.

It took one goal from Elbouzedi on 62 minutes to seal Ireland’s fourth win of the series, his back-post finish alleviating a growing sense of anxiety on Kenny’s bench.

Ireland had been similarly frustrated last time out in Iceland, where they suffered a first defeat of the campaign, but unlike that day in Reykjavik, the opposition didn’t possess the nous to complement their attrition with end product.

Only once did Armenia dissect the Irish defence and it would prove costly, though not to the ultimate extent of conceding an equaliser. Dara O’Shea, standing in as skipper for the suspended Jayson Molumby, got blindsided by the surge behind of Karen Melkonyan.

When the pursuer finally recovered, he tangled legs with the raiding attacker on the edge of the box and referee Antti Munukka viewed the culpability one way.

It wasn’t the only scare for a makeshift Ireland side to endure. Stoppage time was looming when Hovhannes Nazaryan was allowed ghost into the box undetected. Fortunately, he nodded over from six yards.

“Persistence is a big thing in football,” said Kenny afterwards, now turning his attention to Tuesday’s visit of Sweden to Tallaght.

“Armenia beat Luxembourg and held Italy to a 1-0 win but they weren’t used to being pressed like that. We were relentless with that tactic and it caused them problems.”

The ploy was all the more admirable given Kenny made seven changes from the side beaten in Iceland. Only one wasn’t enforced but the newcomers were on-message from the off, with Elbouzedi the main outlet for attacks.

“We’d noticed from videos of Armenia’s previous games that we could get at their full-back,” said the Waterford winger, currently attracting interest from Shamrock Rovers and Dundalk. “I had got the better of the him in the early exchanges and knew I’d get some chances.”

He wasn’t the only one piercing Armenia’s backline. O’Shea was a whisker from connecting with a free-kick from debutant Thomas O’Connor on 12 minutes. Jason Knight angled a golden chance wide on the half hour and Nathan Collins failed to trouble the goalkeeper from a close-range effort.

As half-time approached, Elbouzedi tested Sevak Aslanyan for the first time with a shot that the goalkeeper stuck out an arm to steer out for a corner.

He got another sight of goal shortly after the restart only to hesitate, enabling Hrachya Geghamy to snuff out the danger.

Elbouzedi always seemed to have the measure of his marker, however, and lost him for the solitary goal.

On his first competitive Under-21 start, Knight broke up an Armenia passage of play to release Adam Idah down the right. His low cross was dummied by the intuitive Connor Ronan and ran into the path of the unmarked Elbouzedi. With Geghamy scampering across, he was too late to prevent Ireland’s match winner hoisting the ball over Aslanyan.

O’Shea’s is banned for the visit of Sweden but regular captain Jayson Molumby will return for the second part of the double-header. The availability of Troy Parrott and Lee O’Connor, however, will be decided by Mick McCarthy.

The pair could yet be involved in the decisive senior Euro qualifier against Denmark 24 hours earlier.

“We’ll see over the next few days what squad we’ll have for Tuesday,” said Kenny.