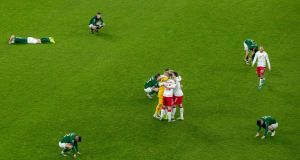 Danish players celebrate at the final whistle as Republic of Ireland players fall to the ground around them after the Euro 2020 qualifier. Photo: Morgan Treacy/Inpho

In every victory you need a defining moment to go your way, and the 31st minute last night felt like just such a moment, when Denmark’s Andreas Cornelius, already bandaged around the head after a collision with John Egan, pulled up with a muscle injury in front of the dugouts and walked off the pitch shaking his head.

Denmark had already lost key midfielder Thomas Delaney after he twisted his ankle trying to challenge Alan Browne after just eight minutes. Now Åge Hareide’s options were narrowing further. It was beginning to feel a little bit like the Cardiff qualifier in 2017, when Wales had to face Ireland without the injured Gareth Bale and then had Joe Allen carried off with concussion after half an hour.

Sometimes it’s just not your night. Wales felt it then, and the Danes were feeling it now.

All of which just goes to show that a big part of being successful in football is ignoring all the irrational and superstitious nonsense that comes boiling irresistibly out of your subconscious at various moments in the game, and keeping your mind focused on the job.

Denmark may have been rattled by the injuries but their task was still a simple one. Keep their shape, keep their heads, keep closing the gaps at the back. If they picked off a goal on the break, that would be good. If they didn’t, that would also be fine, as long as nothing went wrong at the back. They had faced Ireland five times without defeat and there was no reason they should start losing to them now.

Mick McCarthy’s selection looked designed to keep a clean sheet, with Browne, a central midfielder, given the nod on the right side of the attack ahead of more offensive-minded options like Callum Robinson or Seanie Maguire. It was clear that McCarthy felt the decisive period of the game would come in the last 15 or 20 minutes, when fresh attackers from the bench could hopefully harness the energy of the crowd and break that Danish defence.

It turned out that McCarthy was right about the pattern of the match but on reflection, maybe the first 70 minutes of the game could have been more than simply an exercise in staying in it. Ireland would have been pretty confident at half-time that things were going to go their way. The first-half had been Denmark’s weakest performance of the six-match series. And yet Ireland still had to do more to win it.

McCarthy made his first change on 68 minutes, Robinson on for Hourihane, with Browne moving back into the middle. Still, the game was cagey, with few chances.

Seven minutes later, the sucker punch. Ireland had plenty of players back as Denmark worked the ball from a throw on their right wing, but neither McClean, Browne nor Glenn Whelan got close enough to close down Henrik Dalsgaard. He came infield onto his left foot and whipped a cross towards the penalty spot. Martin Braithwaite anticipated the ball, the Irish defenders did not. Duffy was two yards behind the rest of the defensive line, and Matt Doherty, who was closest to Braithwaite, was slow to react.

There was a great whump of silence as the ball hit the net and then the distant Danish roar went up from behind the Havelock goal. The Irish silence went on for quite a while, leaving nobody in any doubt about just how much confidence the crowd had in the team’s chances of recovering from this.

McCarthy sent on Maguire for Browne and urged the troops forward. But Ireland looked out of ideas. The low point was probably McClean’s shot from 30 yards that trickled through, snuffing out an Irish attack and giving the Danish defence a breather. Last week McClean called a journalist a “f**king weasel”, apparently after becoming annoyed by posts mocking him on social media. But if he still hasn’t learned at the age of 30 that he has no chance of scoring from 30 yards and should try something else instead, what else can people do but laugh?

There was still time for Ireland to score with their own improvised version of a Trent Alexander-Arnold/Andy Robertson crossfield fullback link-up.

The ball reached Doherty on the right and his cross beat everybody and went out left to Enda Stevens. Stevens took a touch and whipped it back across, where several Irish players were arriving, among them Doherty, whose powerful header found the bottom corner. It was not quite a true one-two but it was still one of the best goals Ireland have scored in a while. Doherty’s first goal for his country kept up this strange record of the last 17 Ireland goals having been scored by 17 different players.

Unfortunately, Ireland could not force a winner, as players like Kasper Schmeichel used their experience and ran the clock down. In the end it was Denmark celebrating again in their Havelock home from home. For a place they don’t really like having to visit, they’ve had some killer times in Dublin.

Why did Ireland fail to qualify? It’s because they scored seven goals in eight games and the Danes scored more than three times as many. McCarthy has appealed throughout the campaign for more positivity around the team. But if he is seeking the source of negativity, he might also want to look at his own tactics.

Mick approached this team-building project the old-fashioned way, by building from the back and hoping the rest of a team would take shape on that solid foundation. Ireland did finish with the best defensive record in the group.

Switzerland and Denmark have been able to score goals against the other teams in the group because they have a plan for what happens when they get the ball. Ireland’s plan is to get it to McGoldrick and hope he can lay something off. We surround him with strong runners like McClean, whose tenacious pressing helped to force the late equaliser in the home match against Switzerland. We are now exploring the outer limits of how far we can get with this approach.

The lesson of this group - a lesson we should have learned by now - is that determination football is no longer enough to qualify us for the Euros, a tournament so bloated that even Ireland haven’t been knocked out of it yet, not completely, not quite. There’s still the play-off in March. But without more positive thinking about what to do when we have the ball, it’s hard to see a positive outcome.

1 Waterford turn Kilkenny upside down and inside out
2 Jim McGuinness: There is a way to save championship and make it competitive
3 Waterford’s frenzied waves of attacks too much for Kilkenny
4 Sordid murder of hurling brothers still resonates in south Galway
5 Klopp furious as injuries mount and VAR decisions prove costly
Real news has value SUBSCRIBE
Crossword Get access to over 6,000 interactive crosswords