O’Neill ready to take another step up 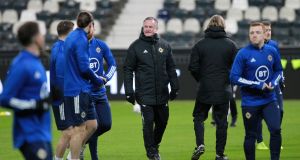 Michael O’Neill believes Northern Ireland are moving in the right direction despite missing out on automatic qualification for Euro 2020.

O’Neill’s side play their final Group C fixture on Tuesday when they face Germany in Frankfurt, but attention is already shifting to the play-offs in March after Saturday’s goalless draw with the Netherlands ended any chance of advancing directly.

That Northern Ireland could not match their achievement of reaching Euro 2016 out of a group that included the Dutch and Germans is no surprise, and O’Neill sees no failure in that.

“Of course we were in a position to take more points, but people have to be realistic with the level of the opposition that we’re playing against,” he said.

“For most of our players it is a huge step up. For us to get to the finals ahead of Germany and Holland, I’m not sure how many other teams in Europe would be capable of doing that.

As it stands, Northern Ireland look likely to face Bosnia and Herzegovina away from home in March, though the picture could yet change.

If Hungary can beat Wales on Tuesday to qualify automatically, Northern Ireland could yet get a home fixture but the outcome will not be known until Friday’s draw in Nyon.

O’Neill plans to stay on and take charge of those play-offs alongside his new role as Stoke manager, though inevitably speculation is already rife as to who will eventually replace him.

O’Neill is expected to play a role in deciding his successor and is certain he will be handing over a team on the rise.

“There has been an influx of new players, relatively-inexperienced players who have been asked to play international football at a very early stage of their club careers,” he said.

“How those players have adapted to that is testament to the likes of Craig (Cathcart), Jonny (Evans) and (Steven Davis).

“They have been the backbone of the consistency of the team and have made it easier for those younger players who have come in.

“I think we’re in a good place. If you look at our qualification record... before we played Germany in September, it was over 60 per cent in terms of our win ratio, so for a country like Northern Ireland to have that win ratio in qualification games is extremely pleasing.

“We just have to try and maintain this level. We hope that in future UEFA is a little bit kinder to us when they pull the balls out of the pots, and we get a better draw but otherwise, the team is going in the right direction.”

Craig Cathcart stands to earn his 50th cap in Tuesday’s match, though his regular defensive partner Jonny Evans could miss out after suffering with an illness.

Jamal Lewis has already been ruled out, having returned to Norwich for assessment on a knee injury suffered on Saturday.

1 Kevin McStay: Maybe a knockout All-Ireland Championship is the long-term solution?
2 Gerry Thornley: Ireland don’t want to box themselves into a corner
3 New Killarney athletic track another jewel in the Kingdom’s crown
4 No further players to be called up to Ireland squad to face Georgia
5 Fernandes on the double as Manchester United get their revenge
Real news has value SUBSCRIBE
Crossword Get access to over 6,000 interactive crosswords