Euro 2020 playoffs: Who will Ireland play? 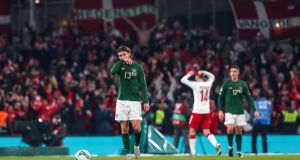 So, Ireland head to the playoffs after a battling performance in Dublin which saw them come up just short against Denmark. On the plus side, Ireland have reached the last two European Championships through the playoff route, albeit not in this same format, so there’s room for positivity.

In this new system Ireland will play a one-off semi-final match away from home on March 26th and, if they win, will then play a one-off final on March 31st with a place at Euro 2020 on the line.

The identity of those semi-final opponents will possibly become clear on Tuesday night after the final round of qualifiers with particular focus on the meeting of Wales and Hungary in Group E.

Put simply, if Wales beat Hungary and therefore secure automatic qualification, Ireland will face Slovakia away in the playoff semi-finals.

If Wales draw with Hungary and Slovakia beat Azerbaijan then Ireland will be preparing for another make-or-break clash away to Wales.

Finally, if Wales lose to Hungary then we will have to wait until Friday’s playoff draw at 11am to see whether Ireland will play Wales, Slovakia or Bosnia and Herzegovina although we do know that the fixture will definitely be away from home. This situation also applies if Wales draw and Slovakia unexpectedly slip up against Azerbaijan.

In this situation a draw will take place to decide which of Wales, Slovakia or Northern Ireland will be moved up to fill the remaining playoff slot in League A. Bosnia and Herzegovina cannot be moved to League A as they are league winners and will therefore stay within their path while Uefa also stipulate in their competition regulations that hosts should be given the best chance to advance through the playoffs, meaning that Ireland will remain in the League B path as the only host in that path while Romania will be the hosts in League A and Scotland will be the hosts in League C.

If Ireland make it through the semi-finals then the winners of the other League B semi-final – between Bosnia and Herzegovina and either Northern Ireland, Wales or Slovakia – would await in the final with Friday’s draw deciding who plays at home.