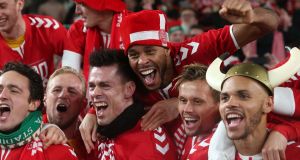 Do you come here often, Denmark?

It being the 10th anniversary of yer man’s handball, if Fifa wanted to mark the occasion by demonstrating they have some mercy in their collective souls, they’d have pledged to us that we wouldn’t be paired with the Danes in any form of competition again until, at the very least, Thierry reaches pension age.

Mick McCarthy had said he’d woken up ahead of the game to discover his butterflies had their boots on, and when Matt Doherty equalised, said butterflies were somersaulting in the nation’s tummies. But it wasn’t to be, it’s the bloody playoffs again.

The build-up began on the Six One News where Ronnie Whelan was reminiscing about that 1-5 setback against the Danes two years ago when, he nigh on spat, we sent out a midfield three of “Meyler, Arter and AN Other”, as cutting an assessment as poor old Jeff Hendrick has ever received in his career.

But Hendrick was back in the lineup for the latest do-or-die meeting with the Danes, although more accurately it was a do-or-end-up-on-life-support encounter this time around, with a place in the playoffs guaranteed if it all went pear-shaped.

And the permutations on that front were straightforward enough – if Wales beat Hungary on Tuesday night then we’d be away to Slovakia for our playoff semi-final; if the Welsh draw, then we’d be off to Cardiff; if they lose, then we might be away to Bosnia, and if we won our semi-final, whoever it might be against, we’d possibly be up against Bosnia, Wales, Slovakia or Northern Ireland in the playoff final. All clear, then.

The way to avoid having to book flights to several European capitals all on the very same date was for Ireland to beat Denmark for the first time in a competitive game since 1999, when Troy Parrott was -23, a stat that forced RTÉ to dip in to its Pathe archives to find footage of the famous day.

How confident was the panel that our boys could turn back time?

That possibly summed up the mood of the nation – when it comes to sporting matters, we tend to live in hope, while fearing the worst, which is a sensible enough way to be.

This Euro 2020 qualification process, of course, felt like it began even before Glenn Whelan was born, Brian Kerr having expressed some misgivings about it all on Virgin Media. “I think you should have to earn qualification by merit, not by beating teams of your own standard because you’re brutal and the others are a little bit more brutal,” he’d said.

That, and we have to be honest here, encapsulated Ireland’s qualification campaign thus far, brutal but not quite as brutal as the teams we took points off, but there’s always hope, if not confidence, and both Liam Brady and Didi Hamann nodded when Richie expressed such an outlook. Didi, incidentally, was charmingly talking about “we” when referring to the lads, but reassured Darragh Maloney that’d be ‘they’ if they failed to prevail.

Out came the teams and George Hamilton took one look at the visitors and said…. “friendly invaders …..this time”.

It’s on or around 1,300 years since Vikings of a Danish origin arrived uninvited on our shores and pillaged the bejaysus out of us. Some have accused us of being incapable of moving on from Thierry’s handball, mainly English people who talk about Diego’s handball likes it’s current affairs, but from George’s tone you’d half be thinking the Danish Vikings pillaged the Grafton Quarter last week.

George, then, was well up for revenge, as were those who chuckled at the Delaney fella hobbling off the stage and playing no further part in the proceedings early in the contest. Thomas, though, not John. So behave yourself.

And then Andreas Cornelius ended up with a bandaged head before departing with a shagged hamstring, so by now Denmark were picking up more injuries than their pillagers.

The panel was content at the break, apart from Liam when he was tasked with analysing Hendrick giving the ball away, his forehead wrinkling so violently it almost disappeared in to his ears.

And then he was told John Egan had gone off injured and Ciarán Clark was coming on to replace him. “This is a blow ….eh, Ciarán Clark, I don’t, you know, wish to … eh, but [laughs nervously] sometimes there’s a mistake in him.” Full confidence in the fella, then.

Second half and it was all going perfectly fine until that Braithwaite person, well, pillaged our hope, George not unreasonably assuming the goal had been scored by “ERIKSEN!!!!!”, because that’s what he tends to do against us. Doherty made us dream again, but it wasn’t to be.

The dream lives on, though. Slovakia, Wales, Bosnia….. ah God, whoever, we’re on life support.