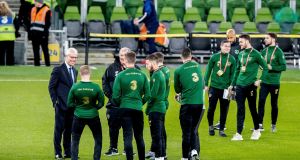 Republic of Ireland manager Mick McCarthy and players on the pitch before the Euro 2020 qualifier against Denmark. Photo: Morgan Treacy/Inpho

Alan Browne has got the nod to start for Ireland in their do-or-die Euro 2020 qualifier with Denmark with Callum Robinson settling for a place on the bench as Mick McCarthy made three changes to the side that lost to Switzerland last month.

Matt Doherty starts at right back ahead of the suspened Séamus Coleman while David McGoldrick comes in up front and Conor Hourihane starts in midfield.

Darren Randolph takes his place in goals with Shane Duffy and John Egan again partnering each other in the centre of defence and Enda Stevens resuming the left-back position.

The five-man midfield is made up of Browne, Glenn Whelan, Jeff Hendrick, Hourihane and James McClean while David McGoldrick will start as the lone striker.

Ireland know only a victory will suffice to qualify for next year’s tournament while a loss or a draw would leave McCarthy’s men facing the Nations League playoffs in March.

Denmark coach Age Hareide also made three changes to the side which beat Gibraltar 6-0 on Friday evening with Henrik Dalsgaard, Yussuf Poulsen and Andreas Cornelius returning to strengthen the side.

Follow live coverage of Ireland’s crucial qualifier on our liveblog from 7pm.