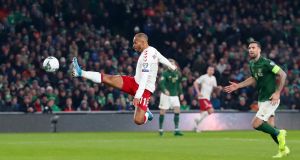 A decade to the day after Thierry Henry and now we have to deal with this. By 2029 a glance at the record books might suggest it was just one more of those draws against the Danes but this game was different.

There was none of the injustice of that night in Paris, but there were shades of most everything else. And if Ireland can perform like this in the play-offs come March, they have every reason to believe they can play a bigger part in next summer’s European Championships than simply hosting somebody else’s party.

At the end, you could feel the pain of the players out on the pitch from the stands. Having gone a goal behind late on, they chased things and equalised. There could easily have been another and there was even the sense through the final minutes that Denmark, for once, were the ones hanging on.

Ultimately, though, Age Hareide’s side had enough about them to see the game out and despite Matt Doherty’s 85th minute goal and the increasingly desperate efforts of the other Irish players, it is they and the Swiss who go directly to the finals. For Mick McCarthy, the consolation will be that his side will not face one as good as either of this group’s top two sides in the spring.

By starting Alan Browne on the right side of Ireland’s attack, the Ireland manager had played his cards cautiously to start with. But bar a couple of short spells through the first half, the selection clearly helped to stifle Denmark’s progress down a flank where they had thrived in Copenhagen.

Overall, the balance of the home team looked better than it had through any of the other group games and there were certainly spells in the second half when they looked the more likely side to win.

After the all action start we have become accustomed to, there was a moment almost precisely midway through the first half when it seemed that normal service was being resumed. It started, as these things sometimes do, with James McClean giving the ball away after which the Danes attacked. Enda Stevens intervened to push the ball back to Darren Randolph who cleared and suddenly it was apparent that a huge space had opened up between David McGoldrick and his midfielder. The visitors simply picked up possession and got started on their next build up.

This, it seemed, might be the start of the rest of the night.

For once, though, the home side managed to quickly wrestle back some control over the proceedings. They were helped to a huge extent by the fact that they completely bullied their opponents in and around their own area for all but a few critical seconds.

Andreas Cornelius was apparently started to counter the physical strength of Shane Duffy but it turned out he was no match for Doherty or John Egan, although it was a random hamstring that appeared to end his night half an hour in. By then Thomas Delaney had already departed after having gone over awkwardly on his ankle under early pressure from Browne. The dose of Danish misfortune can hardly have been central to McCarthy’s game plan but it is hard to imagine he was grumbling on the sidelines.

There were occasions when the press exerted by his players simply wasn’t good enough and the visitors tended to play their way out from the back a little more comfortably than their hosts had early on. But there were decent stretches when the intensity of the Irish approach was undeniably impressive and times, too, when Hareide’s men looked distinctly rattled. When Kasper Schmeichel put Jens Stryger Larsen under pressure late in the first half and the full back just hoofed the ball straight out of play, the ironic cheers might have been captioned for the Danish audience back at home: “Now you know how it feels”.

There were moments of real quality too, from McGoldrick and Stevens most obviously, but also from Doherty. Conor Hourihane and Browne were both effective at times and between them they had Ireland’s best two chances of the opening half.

For all the positives, those felt like isolated moments whereas as the game progressed, Ireland started to exert real pressure and there were a couple of occasions on which Schmeichel and his defenders did not look to be completely on top of things. Ireland, though, weren’t quite able to capitalise.

Still the seconds ticked away without a goal, though, and while Christian Eriksen was quiet for the most part and his teammates were making more errors than usual, the Danes always looked like a side that might grab something on the break.

They very nearly did 20 minutes from time when Doherty had to rescue things after Henrik Dolberg worked his way into space and prepared to shoot from close range.

Moments later, it didn’t seem to matter. Henrik Dalsgaard was given time to weigh up his options out on the right and played an angled ball towards the centre of the area. Duffy was caught flatfooted as Martin Braithwaite raced beyond him and diverted the ball past Randolph with the studs of his outstretched boot.

Doherty’s equaliser was the highlight of what followed from an Irish perspective, of course, with the defender heading a Stevens cross home after Duffy had hampered Mathias Jorgensen and Braithwaite’s attempt to get off the ground. The urgency of the players, the roar around the stadium the instruction to Duffy to stay up front all suggested that there might be one more glorious twist in store but Ireland didn’t quite have it in them to deliver the knockout punch they needed.

1 Golf in Level 5 Covid restrictions: Clubs still waiting to hear if they can remain open
2 Gordon D’Arcy: Ireland don’t need to do a Finn Russell on it
3 CJ Stander ready for Italy after lockdown sheep battles
4 Hugo Keenan could start in changed Ireland team against Italy
5 Aki, Ringrose and Henshaw: Brian O’Driscoll has his say on Ireland’s midfield riddle
Real news has value SUBSCRIBE
Crossword Get access to over 6,000 interactive crosswords