Refereeing not for the faint-hearted or sensitive 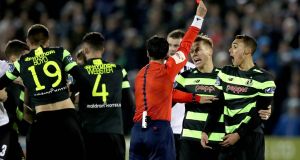 There are around 1,300 referees registered at various levels across the country according to the FAI.

Some 250 to 275 come through the beginners’ course each year although some of those never end up refereeing a game and about half, it is reckoned, do not make it into a second season.

Those taking the course may begin to wonder just what they have signed up for when the instructor demonstrates how to show a player a card while staying outside the “headbutt zone” and the representative of the Irish Soccer Referees’ Society (ISRS) mentions dental insurance pretty prominently in his pitch for new members.

In reality, serious violent incidents are rare, according to long-time League of Ireland referee Paul Tuite who runs sessions for beginners before the Society’s Dublin branch main meetings; events that give every impression of being almost entirely unchanged since the organisation was founded 60 years ago this month.

“Daniel Sweeney [the referee hospitalised with a jaw broken in two places, a fractured eye socket and other facial injuries in Mullingar a year ago after having been attacked by three players and a spectator who had already banned from playing for life] was the worst we had seen for a long time,” he says.

“In Dublin, we probably have five or six incidents a season, physical assaults but it’s generally [being] pushed, by players.”

The far more widespread issue is verbal abuse and the Society’s meetings provide an opportunity to discuss how to handle that as well as sessions on law changes along with general guidance and support.

“Somebody has to be there for them because really with the FAI, you do your beginners’ course, you give them your €100 (the course fee), you are assigned to your league and that’s it; a couple of weeks later, you are out there by yourself.”

John Feighery, another former League of Ireland referee, who delivers some of those courses for the association, accepts that there should be more support provided but resources are clearly an issue.

“I still remember my first game,” he says. “It’s a culture shock. When the whistle blows, everyone looks at you and that can be very daunting, especially in the first three or four games and the problem is that refereeing is not an exact science.

“A lot of the people that start out just aren’t prepared to put up with the abuse. It’s tremendously difficult, especially for young referees. I’d love there to be a buddy system, give mentors to referees but it’s a lot to ask. The referees are bottom of the tree. It’s not the most popular aspect of the game.”

Aside from the €100 to do the beginners’ course, those starting out will need a basic kit, including whistle and flags, costing around €65. Having transport is a big advantage as there can be a fair bit if travel involved, even with the younger age groups.

Payments for matches start at €18 and go up to €48 in the underage game, €59 at intermediate men’s level and more in the League of Ireland. At schoolboy/girl level it is not uncommon to be handed three games in a morning which will earn the referee around €75 out of which they must pay any expenses. That might typically involve leaving home at 9am and getting back at 2pm.

For young match officials who take to it and show promise, however, especially young women, given the explosion in the number of girls playing and improved standard of women’s competitions, there are definite opportunities to progress, to work at higher levels and, potentially to travel.

The achievements of Michelle O’Neill, an assistant referee in the women’s World Cup final, are widely cited but even relatively inexperienced referees can sign up for invitation tournaments abroad with expenses often offered.

“The money?” says Feighery, “it’s okay. It’s certainly got better. It’s not a fortune but because you get paid there is an expectation. But we don’t have enough referees so they end up doing two or three games and the last one tends to be the most demanding, so that can be tough.

“If you are under 30, cut for it and good, though, there are definitely more opportunities than there used to be. Each league has their own observers They would be the first people to spot somebody with potential, that something special.”

For the 31-year-old sales manager from Ballybrack, refereeing seemed an obvious way of staying in the game after he tired of trying to manage an amateur team.

“We were in one of the lower divisions of the Leinster Senior League and some of the players just weren’t all that committed which obviously becomes an issue for everyone,” he says.

“I had done some very casual reffing in the UCD Superleague and decided to take the course. Thought about giving it up again plenty since then but I’ve also had some amazing experiences over the last eight years.

“I’ve refereed in America, Norway, Taipei, England, Switzerland (organisers often pay expenses  to come and do games at invitation competitions); I’ve been involved in some amazing youth tournaments and made great friends here at home through it. It’s given me far more than I’ve given it,” concludes the Dubliner, who has done well enough back in the Leinster Senior League and elsewhere to be brought into the FAI’s school of excellence, a necessary step for any referee hoping to work at the highest levels of the Irish game.

The 21-year-old student and entrepreneur hit the headlines at the start of the summer when he announced on social media that he was to give up refereeing in the Kildare District Underage League “after four years of abuse and violent threats”.

Five months on, he still feels he had no option because, he says, of the lack of support offered when he reported a specific incident of being physically threatened by a team official during a game.

“I haven’t done a game since that day,” he says. “I thought they should have taken action and let me know what had happened but I literally never heard back from them after I had submitted the report.

“I didn’t think that they had an interest in protecting me or other referees and this was after what I think was about the worst thing that could happen short of an actual assault.

“It’s unfortunate because it’s something that I really enjoyed.

“My brother was a referee, my grandfather had been a League of Ireland referee so there was a connection but I didn’t feel that I could keep at it after that.”

1 Trump in the rough over playing golf and US Covid-19 fatalities
2 Suarez’ Italian language exam rigged according to prosecutors
3 Awarding of 2023 Rugby World Cup to France part of Laporte investigation
4 The Offload: Saracens prove Pro14 is not fit for purpose
5 Two in custody in Tour de France doping investigation
Real news has value SUBSCRIBE
Crossword Get access to over 6,000 interactive crosswords