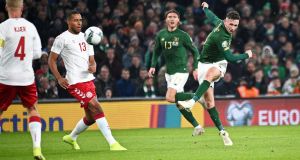 Has been assured all through the campaign and that shows in the fact that he has only conceded five goals in eight matches. Couldn’t do anything about Braithwaite’s goal and looked calm and composed as ever with the ball at his feet when passing out from the back. Rating: 7.

His dribbling, good decision-making and calmness on the ball are a major asset going forward for Ireland and he was having a great game until he lost sight of Braithwaite for the Danish opener. However, his equaliser again proved how beneficial he is. Rating: 6.

Got a great block in on an Eriksen volley which looked destined for the top corner. His partnership with Egan has been a real plus of this campaign and he looked just as comfortable beside Clark. Rating: 7.

Won an early header to set the tempo as Ireland hassled and harried the Danes. Was as assured as ever beside Duffy and his removal at half-time due to injury was a blow. Rating: 6.

Linked up nicely with McClean once or twice to create chances. He eventually got the reward for his runs up and down the wing with a lovely cross to the back post to find Doherty for the equaliser. Failed to compose himself in injury-time with Schmeichel on the ground. Rating: 6.

Not his most familiar position on the right. Flashed a decent volley wide in the first half after reacting quickly to McGoldrick’s knowdown. Looked dangerous cutting inside a few times and certainly didn’t seem out of place. Rating: 6.

Very unlucky to be booked for winning the ball with a slide tackle but it came about from a poor pass which lost possession. His international resurrection has definitely been a plus in these qualifiers. Rating: 6.

Should probably have done better when he went through in the first half and tried to open his body to shoot with his left rather than the right. Delivered some dangerous crosses as usual which caused panic in the Danish area. Rating: 6.

Gave the ball away a number of times in the first half when he perhaps should have held it up. Failed to create much more in the second period and has performed below his potential for most of the campaign. Rating: 5.

Looks like a player struggling a bit for confidence and his poor crosses showed that, but his endevour and tackling did win possession back a few times. Needs a goal - or something - to rekindle the spark. Rating: 5.

Held the ball up well as he always does and that strength created the opening for Hourihane in the first half. Knocked down a long ball for Browne’s volley and even did well out wide late on. Definitely the best option up front. Rating: 7.

Ciarán Clark almost made an immediate impact with a header towards goal from a corner and slotted in comfortably after a long absence from competitive internationals. Callum Robinson failed to make much of an impression while Seán Maguire definitely brought a spark. Rating: 6.

Ultimately Mick McCarthy’s brief was to qualify Ireland for the Euros and he hasn’t achieved that yet. However, this performance showed what the team is capable of and the play-offs may just prove the saviour for Ireland again. Rating: 6.