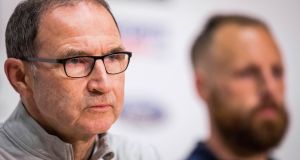 Ireland manager Martin O’Neill agreed a new deal to stay on as manager until the 2020 European Championships. Photo: Ryan Byrne/Inpho

There have been many cases in Irish sport of managers getting new contracts just before things went wrong at a major tournament in a way that made it difficult for them to go on. Mick McCarthy got a new two-year contract after qualifying for the 2002 World Cup, then he fell out with Roy Keane and half the supporters wanted him gone.

Giovanni Trapattoni got a new two-year contract after qualifying for Euro 2012, then Ireland failed horribly in Poland and everyone wanted rid of Trap. The problem is not limited to football: the IRFU sent Eddie O’Sullivan to the 2007 Rugby World Cup with a new four-year deal, only for Ireland’s awful performance at that tournament to leave everyone feeling it was time for a change.

The FAI have therefore broken the mould somewhat by rewarding Martin O’Neill with a new contract just before he possibly fails to qualify for the World Cup. In a way, it is admirable that the FAI are backing their judgment that O’Neill is doing a good job without waiting to see what happens against Moldova and Wales. They’re rewarding the process rather than the results, which is rare in football, though you wonder what factors are shaping their understanding of the process.

At Thursday’s press conference O’Neill listed some reasons why he felt he would probably continue in the job. The first reason was that he had successfully qualified for one tournament out of one so far. The second was that the number of season tickets sold had increased from 4,000 to 16,000 during his time as Ireland manager.

It was striking to hear O’Neill mention a commercial argument alongside a results argument, and it’s reasonable to query whether the commercial argument should really be part of this decision. A 400 per cent increase in anything usually sounds impressive, but 16,000 is not really such a huge number of season tickets for Ireland to sell. It would put Ireland 15th in the Premier League table of season tickets, between Crystal Palace and West Brom. It’s more that the 4,000 a few years ago was pitifully low.

BREAKING: Martin O'Neill has agreed a contract extension and will continue as the Republic of Ireland manager for the EURO 2020 campaign! 👏 pic.twitter.com/UAjiKoMGVh

Back in 2006, the FAI claimed to be shifting 32,000 tickets in advance sales for Ireland matches, so the team is still some way off its former popularity. The increase could suggest that O’Neill and his staff are doing something right, but it also reflects the fact that Ireland season tickets have got cheaper, while the general economic situation has improved.

O’Neill must have felt the FAI’s show of confidence was particularly welcome at this time, since the last 25 minutes of the last Ireland match were among the most depressing spells of football the team has produced since he took charge. A man up against Serbia after Nikola Maksimovic was sent off for dragging down Daryl Murphy, the chance was there for Ireland to take control of the match. Instead, every promising situation was wasted by desperate players hitting harmless shots from long range.

The match petered out with Serbia goalkeeper Vladimir Stojkovic sauntering about in the six-yard box, taking his sweet time over every kickout and glorying in the eventual yellow card he received for timewasting.

Of course, it’s impossible to get every decision right in real time, and that goes for coaches as well as players. For instance, if O’Neill could go back in time to the last 20 minutes of the Serbia match, maybe he would not move Robbie Brady to left-back to accommodate the introduction of Callum O’Dowda.

It’s not that O’Dowda was the wrong choice of substitute – he played well when he came on. But the advantage of having Brady at left-back is that his left-footed deliveries can be a real threat on the overlap. And if you are playing against 10 men, it should be easier to create dangerous crossing angles for Brady.

The problem on the night was that O’Dowda looked to get wide and take his man on, rather than move inside to create space for an overlapping full-back. This left Brady standing further back the pitch with nothing much to do, so an ostensibly attacking substitution turned one of Ireland’s best players on the night into a marginal figure for the game’s most crucial period.

On Tuesday, Keane suggested that coaches could help players with in-game decision-making, giving the example of a recent incident involving James McClean at West Brom. Their match against Watford was in the fourth minute of injury time when McClean conceded a free-kick in a dangerous position with a typically over-zealous challenge. Watford scored and West Brom ended up drawing a match they had been leading 2-0. “Those are the examples of when you would take James aside and say, ‘stay on your feet there James and show him down the line’,” Keane said.

He was absolutely right, but if the Irish management team have been talking to McClean about the importance of tackling people without fouling them, he doesn’t seem to have been paying too much attention. He is suspended for the Moldova game after the referee punished him for one unnecessary kick too many against Serbia. Yes, if you had to pick a match to sit out it would probably be Moldova at home, but McClean was the player who made the difference in the reverse fixture against Moldova, with two goals in the 3-1 win, so you hope the team doesn’t end up missing him badly on Friday night.

1 Gerry Thornley: England primed to show their best against Ireland
2 Should fans be allowed drink in the stand at sporting events?
3 Frank Lampard says Harry Maguire should have been sent off
4 Stopping Jonny May’s pace must be high in Ireland’s priorities
5 Tipping Point: Eddie Jones’s rhetoric is out of place in a febrile political climate
Real news has value SUBSCRIBE
Crossword Get access to over 6,000 interactive crosswords