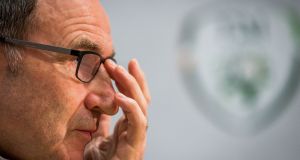 Martin O’Neill has given the strongest indication yet that he intends to stay on for the next European Championship qualifying campaign regardless of how the next four days go.

The Ireland manager confirmed that he has discussed his position with the FAI’s chief executive and that both parties are inclined to agree a new contract.

“I think there would be a willingness of both sides,” said O’Neill who said that, despite a difficult year for the team so far, he believes he has performed well in the role so far.

“John (Delaney) would like me to continue and I would certainly be looking forward to....with the Euros and the possibility of the team qualifying and some games in Dublin ahead, there are some exciting times ahead.”

O’Neill gave the impression that a deal will be done regardless of whether Ireland qualifying for next summer’s World Cup and even if they miss out on the play-offs citing his qualification record so far as “one from one,” but he suggested that he still believes his side can overhaul Wales to take second place in group D and secure enough points to earn a play-off spot.

“The equation is very simple, we have to win the games,” he said. “The team selection is one part of that and then the players have to play. They need to perform tomorrow night but I think that they are up for it.”

All of the Irish players are, he said, fit enough to be selected although he emphasised that “match fitness” is an issue for a few “most obviously James (MCCarthy)”, who, he says, has made considerable progress in recent days.

Harry Arter, he said, believes he is completely over the calf strain that kept him out of Bournemouth’s two most recent games while Shane Long came through training on Friday without any apparent issues.

1 Sordid murder of hurling brothers still resonates in south Galway
2 David Humphreys: Georgia simply can't be dropped in at the deep end
3 Ireland’s work-ons: Four things Andy Farrell needs to address
4 Ireland’s clash against Georgia will be an important audition
5 It’s good to have Richie Hogan back, he was missed
Real news has value SUBSCRIBE
Crossword Get access to over 6,000 interactive crosswords