Here’s everything you need to know about Moldova 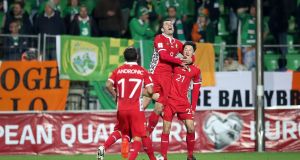 The Republic of Ireland head into Friday night’s World Cup qualifier against Moldova knowing anything other than victory over the Group D basement boys could end their hopes of making it to Russia next summer.

Here’s a look at the team Ireland need to beat to set up a potential winner-takes-all trip to Wales three days later.

Moldova sit at the foot of the Group D table having taken just two points from their eight games to date, drawing home and away with fifth-placed Georgia. They lost 3-0 in Serbia last month, but three days later caused Wales problems in Chisinau, where they got to 80 minutes at 0-0 before Hal Robson-Kanu’s strike and a second in stoppage time from Aaron Ramsey spared the visitors’ blushes.

Igor Dobrovolski made his name as a midfielder at Nistru Chisinau before earning a move to Dinamo Moscow, and won Olympic gold with the Soviet Union in 1988 as well as representing his country at senior level at the 1990 World Cup and 1992 and 1996 European Championship finals. He also played in Spain, Switzerland, Italy, Germany and France, but returned to Moldova in 2005 to launch his coaching career and is currently in his second spell as national team boss having led them to a best-ever total of 12 points during qualification for Euro 2008.

Dobrovolski has adopted a 4-2-3-1 formation for much of the campaign with lone striker Radu Ginsari the man asked to lead the line in recent games having taken over from Igor Bugaev. Alexandru Epureanu and Veaceslav Posmac have more often than not linked up in central defence with Andrei Cojocari and Alexandru Gatcan providing the shield in front of the back four.

Goals have been in short supply for Moldova — they have managed just four to date — but their first of the qualification process from 33-year-old Bugaev, when he capitalised on Republic defender Shane Duffy’s error to race away and score, demonstrated the threat they can be if not closely marshalled. Moldova led 2-0 at home to Georgia with dangerous wide-man Alexandru Dedov among the scorers, while midfielder Alexandru Gatcan also has an eye for goal and skipper Epureanu is hugely experienced at the back.