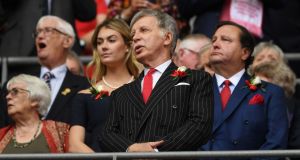 Arsenal’s majority shareholder, Stan Kroenke, has bid almost £525m (€590m) to buy out Alisher Usmanov, the second-largest shareholder who has tried several times to wrest control of the club.

Only last May the American resisted Usmanov’s latest attempt at a takeover, and within the past couple of weeks this slow-burning struggle for full control took a twist as Kroenke offered £28,000 per share for the Russian’s stake.

Kroenke owns 67 per cent of Arsenal; Usmanov has a 30.4 per cent stake. The remaining shares belong to minority shareholders, many of whom have preserved a small holding for decades, even passing down the generations.

Having two main investors who do not have a working relationship, despite having been on the scene for the past 10 years and who appear to hold one another in low regard, is not a healthy situation. Usmanov has never been able to secure a seat on the board or influence any decisions and both men know this will continue with the current awkwardly cut pieces of the Arsenal cake.

Both parties have tried to force a change. If Kroenke succeeds in his attempt to buy out Usmanov, initially reported by the website Arseblog, it would take his percentage to 97 per cent. It would put him in a position to squeeze out the minority shareholders and presents the risk Arsenal would become a privately owned business.

The consequences of that are troubling for the 130-year-old club. As well as removing any requirement for the publication of accounts or an AGM, the option of registering the business in the United States, to be based under Kroenke’s KSE umbrella in Delaware, would open up. There would also be no internal barriers to using Arsenal as leverage in deals as the Glazer family did with Manchester United.

These board-level manoeuvrings have been watched with interest by a consortium of longstanding Arsenal supporters who found heavyweight financial backing and tried to throw their hat into the ring three times during the past year.

They made two inquiries to Kroenke at a valuation of £2bn for the club – £32,000 per share – and made a third attempt at a breakthrough in June via an olive branch idea to buy out Usmanov but that was dependent on a seat on the board and collaboration with Kroenke to create a more unified environment around the club. The Missouri-born entrepreneur turned down all three presentations.

A spokesman for the consortium, which has been in communication with Kroenke and Usmanov for close to a year, expressed concerns about the situation. “We are owned 97 per cent by two very wealthy individuals but it is a disappointment that they have never managed to get together and see eye to eye to move the club forward. The benefit of their wealth and experience could have been felt in unison but Arsenal has not been able to gain from it.”

The consortium’s bid to try to make a difference and lift the club remains on the table. “We absolutely retain an interest,” the spokesman said. “We are a group of experienced local business folk who have had a longstanding involvement with Arsenal. We came together three years ago with a vision to dislodge the impasse that exists with the current ownership.

We wanted to find an alternative. Our group have spent three years searching for the right backer. After our own due diligence we were delighted to have found that a year ago. We have gone out to find the money for Mr Kroenke and Mr Usmanov to make a huge profit and for us to get the club back where it should be challenging at the top.

“If Kroenke were to get to 97 per cent he can force Arsenal into becoming a completely private company. That would be a major concern for everyone involved in Arsenal. At that point transparency would be a real minimum.”

Ashley Brown, chief executive of Supporters Direct, sees this as part of a worrying trend. “It is clear that too many clubs are moving in a similar direction, taking clubs further away from fans and treating them primarily as businesses. The best owners recognise that they are custodians of a football club loved by thousands and operating at the heart of their communities.”

Usmanov may be tempted to sell given his lack of input at Arsenal. Arsenal’s accounts will be arriving through shareholders’ letterboxes on Wednesday and the AGM is on October 26th.