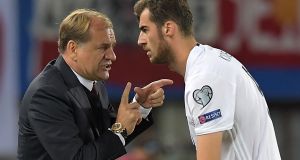 Georgia coach Vladimir Weiss has promised Wales will not get an easy World Cup ride in Tbilisi.

Wales might need to win their last two qualifiers — away to Georgia on Friday and at home to the Republic of Ireland on Monday — to make next month’s play-offs, although four points will be enough if certain results in other groups go their way.

Georgia are yet to win a 2018 World Cup qualifier and have been out of the running for a place in the finals next summer for some time.

But Georgia have proved stubborn opponents in drawing five of their eight games, and Weiss is determined to claim a first victory ahead of Euro 2020 qualification.

“We will do our best and start to look ahead to the next qualification campaign,” Weiss said at his pre-match press conference.

“Every game is important for us, we play for the three points and for our supporters.

“We will not make it easy for Wales but they still have a chance to qualify.

“Maybe (group leaders) Serbia will reach a good result in Austria, but Wales still must win two games. Ireland also have a chance.”

Weiss dismissed the suggestion that Georgia had been lifted by the absence of Wales talisman Gareth Bale, who was ruled out of the game earlier this week with a calf injury.

“He is one of the best players in the world,” Weiss said. “Everyone wanted to see him in Tbilisi.

“But injuries are part of football, but another player will come in and Wales are a strong team.

“It was the same when we played them away last year.

“They played with Bale, but without (Joe) Allen and (Aaron) Ramsey.

“It will be another team, but they know qualification is close.”

Georgia have had their own injury problems with Tornike Okriashvili, who scored in the 1-1 draw in Cardiff 12 months ago, and Jano Ananidze among the key absentees.

“We are also missing two good players ourselves in Okriashvili and Ananidze,” Weiss said.

“We have lost a lot of our attackers and we have to play with a young team.

“But we will try to win against a strong team and a strong coach, and we will see what happens.”

1 Waterford turn Kilkenny upside down and inside out
2 Jim McGuinness: There is a way to save championship and make it competitive
3 Sordid murder of hurling brothers still resonates in south Galway
4 Klopp furious as injuries mount and VAR decisions prove costly
5 Has Mike Tyson completed the least likely redemption story in American sport?
Real news has value SUBSCRIBE
Crossword Get access to over 6,000 interactive crosswords