Shamrock Rovers and Dundalk must do it all over again 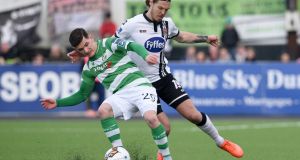 Shamrock Rovers came from behind to take this FAI Cup semi-final back to Tallaght on Tuesday week but having battled their way back to level terms with a quarter of an hour to play, they had to survive some sustained late pressure after David McAllister’s sending off reduced them to 10 men.

It was the fourth time in five meetings between these two sides this season that Rovers had a man sent off, but Dundalk couldn’t quite take advantage on this occasion, as the visitors dug in to see the game out with considerable determination.

Stephen Kenny’s side had had the better of the first half, making more of their possession and carving out the more clearcut chances but Rovers steadily fought their way back into things as the second period progressed. They deserved their equaliser that was set up for Brandon Miele by Ronan Finn as the home side’s defence went to sleep.

The Dundalk goal, after just nine minutes, was the more memorable of the two with Stephen O’Donnell central to a fine team effort that end with his low cross reaching Robbie Benson beyond the far post after Michael Duffy had sucked Simon Madden in towards the centre, then coolly stepped over the ball.

Obliged to chase the game, Rovers were a little fortunate to scrape by at the back on more than one occasion and struggled really to create any serious chances for long stretches. But Dundalk’s grip on this slipped a little after the break as Finn began to exert a good deal more influence and the hosts started to struggle a little in midfield.

The momentum shifted again, though, with the sending off of McAllister who got a second yellow although his challenge on Chris Shields might well have merited a straight red. As the home side pressed, Benson briefly looked to have grabbed a late winner when he powered the ball home from close range but the locals were penalised for a foul as the ball came into the box from a corner - and so Rovers will get another chance to keep alive their hopes of ending their now 30 year run without a cup success.