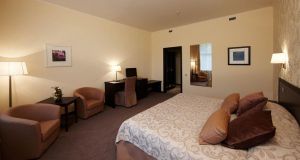 England’s base for the 2018 World Cup is a far cry from some of the palaces of the past. Photo: Booking.com

This is the hotel, on a secluded part of the Gulf of Finland, that Gareth Southgate has chosen to be the base for England’s football team during the World Cup in Russia next summer.

As England aim to seal their qualification by beating Slovenia at Wembley on Thursday, sources in Russia have confirmed that they already have their towels down to take over the 107-room ForRestMix club in the village of Repino throughout the tournament.

Repino, 19 miles outside of St Petersburg, takes its name from its most famous inhabitant, the artist Ilya Repin, who lived there until his death in 1930, and has been identified by the Football Association out of 70-plus venues from Fifa’s World Cup brochure. Staff at the hotel have confirmed that Southgate has already flown in to see the facilities but the announcement has been held back until England are assured of their place in the tournament.

The manager is taking a calculated risk by choosing such a quiet location, an hour away from the nearest airport, when players have complained about feeling bored and isolated at previous tournaments, most notably when Fabio Capello’s squad were based at a purpose-built facility in Rustenburg for the 2010 World Cup in South Africa.

However, England’s players might be in for a surprise if they expect a similar level of accommodation to the £500-a-night Auberge du Jeu de Paume, the opulent five-star hotel that provided the team’s Euro 2016 base in Chantilly, set beside a racecourse, the Condé art museum and the Château de Chantilly.

While that hotel was billed as “the epitome of French finesse and art de vivre,” featuring a restaurant with two Michelin stars and renowned for its links to the French aristocracy, rooms at the four-star ForRestMix are available for around 7,290 to 14,670 roubles a night – £95 to £192 – and the TripAdvisor website rates it only third out of the seven hotels in Repino.

Out of 85 reviews, 73 mark it as “excellent” or “very good” and the overwhelming majority are positive. However, not everyone is impressed. One holidaymaker describes it as being “like a transit hotel in Poland for the price of luxury accommodation”, complaining that there is a “poor swimming pool with lots of chemicals” and a “dirty hammam with disgusting steam quality”.

One review has the title “worst holiday in my life” and others seem unimpressed with the dark decor and modest furnishings, including the rather peculiar complaint that the hairdryer is “creepy” and “looks like an old vacuum cleaner”.

Southgate appears to like the fact that Repino, with a population of around 2,000, is out of the way, set in a pine forest close to the Baltic Sea, and has an indoor gymnasium, a spa, a pool, three restaurants, a helicopter pad and a number of meeting rooms.

The FA had initially been looking at Black Sea resorts, most notably Gelendzhik, but that idea was abandoned because Southgate was worried the summer heat might be too oppressive for his players. That should not be a problem much further north in Repino, where the average June temperature is 16C (61F). Southgate has given his players permission to bring their families and friends, apparently unconcerned by the so-called Wag culture, and St Petersburg is close enough to act as their base.

Six miles along the coast from Repino, England will set up their training camp in the village of Zelenogorsk, with work already under way to transform the facilities of a local sports school and to develop what will be known as the Stadium Spartak Zelenogorsk.

A new training pitch is being created, along with a 500-seat stand, changing rooms and floodlights. Fifa’s brochure makes it clear the site is not overlooked, reducing the danger of opposition spies peeping in, and talks of the “healthy air of the pine forest and the sea” nearby. Zelenogorsk is not to be confused with the town of the same name near Krasnoyarsk, not far from the border with Mongolia, and it is not entirely clear why there is a statue of a dachshund in the middle of the village.

If reserving a hotel and training ground sounds slightly presumptuous, it is probably a risk that can be taken when England are five points clear at the top of their qualifying group, with the Slovenia game to be followed on Sunday by their final assignment, in Lithuania – a team England have already beaten three times in the last two and a half years, with a 9-0 aggregate score.

“We still have to sit down to go through [our World Cup planning] but there’s a lot we’re already working on,” Southgate said. “It would be remiss not to be planning some of these things already. We will learn from the tournaments we’ve been in before and the experiences of the players and staff. We don’t want to leave any stone unturned.”

First, however, there is the chance for England, with their lopsided record when it comes to tournament and pre-tournament results, to qualify for what would be their fourth major competition in a row without losing a single match.

England’s last defeat in a qualifier goes back to October 2009 when Capello’s team, having already made sure of their place in the following summer’s World Cup, came up against Ukraine and Rob Green created a piece of unwanted history by becoming the first-ever England goalkeeper to be sent off.

Slovenia’s visit to Wembley will be the 38th game since that 1-0 defeat in Dnepropetrovsk and Southgate was asked how he would feel if the final whistle meant the achievement of taking his country to the World Cup. “I don’t know in terms of ‘achievement’,” he said. “It’s the objective we set ourselves and that’s where we want to be after this game.

“When we leave Wembley we want to be in Russia with a chance to plot how this team moves forward. It’s a great game for us: at home, no tube strike ... the whole country will want to go to a World Cup. Thinking back to those years when we weren’t in it, as a kid coming home, it was a horrible feeling – wow. So we want to have a crack at it now.”

1 Jim McGuinness: There is a way to save championship and make it competitive
2 Once in a blue moon: Cavan’s overnight success 15 years in the making
3 Waterford’s frenzied waves of attacks too much for Kilkenny
4 Autumn Nations Cup - Ireland v Georgia: TV details, kick-off time, team news and more
5 Waterford turn Kilkenny upside down and inside out
Real news has value SUBSCRIBE
Crossword Get access to over 6,000 interactive crosswords