Tearful Gerard Pique willing to stand down from Spain duty

‘In Franco era, we couldn’t defend our ideas’ - he condemns Spanish police crackdown 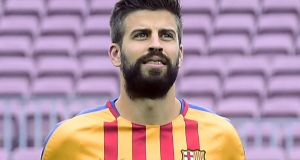 Barcelona’s defender Gerard Pique warms up in the Catalan colours before the match against Las Palmas at the Camp Nou. Photograph: Getty Images

Barcelona defender Gerard Pique says he is ready to stand down from Spain duty if he is deemed a “problem” by national team coach Julen Lopetegui or the Spanish Football Federation as a result of his support for Catalan independence.

Pique made the claim in an emotional interview following Barca’s home match against Las Palmas, which was played behind closed doors as a protest on a day when Spanish police made a violent crackdown on Catalonia’s independence referendum, which they deemed as being illegal.

According to Catalan health officials, more than 800 people were injured as security forces used rubber bullets, pepper spray and baton charges as they tried to prevent the vote from taking place.

Pique, having been pictured casting his vote in the election earlier in the day, played the full match against Las Palmas before speaking to reporters about the decision to go ahead with the fixture, his international future and Sunday’s events in the region.

The Barcelona-born defender said in quotes reported by AS: “You vote yes, no, or leave it blank, but you vote. In the Franco era, we couldn’t defend our ideas.

“I am, and I feel Catalan, and I am very proud of the people, of their behaviour, like in the last seven years.”

Attempts to shut down the polls by Spain’s Guardia Civil led to clashes described by Catalonia president Carles Puigdemont as ”unwarranted, irrational and irresponsible“.

Pique, who was also critical of Prime Minister Mariano Rajoy, continued: “After what has transpired it has been my worst experience as a professional.

“It has been a tough day. There were families, children and grandparents, and the police and Guardia Civil have intervened.

“The people protested without violence. I thought they would try to stop the vote in a peaceful way. Everyone has seen what happened. They’ve made things worse.

“This is among the worst decisions in the last 50 years. They’ve separated Catalonia from Spain even more and there will be consequences.”

But when the club’s request was rejected by the Madrid-based Liga de Futbol Profesional, Barca took the remarkable step of playing the top-flight fixture in an empty Nou Camp — winning 3-0.

Pique said: “The board tried to postpone the game at all costs, we debated it between the players and the club, and chose to play. It was difficult without the supporters.

“There were many arguments in favour and against, but we were playing for the points and the League and Las Palmas wanted to play.

“The club have decided and that’s it. My opinion is not so important. I expressed mine, like the board members expressed theirs. In the end it was decided to play the game. We are a club and we are all in it together.

“But I understand perfectly those who criticise us for having played.”

Pique is now due to link up with the Spanish national team for their forthcoming World Cup qualifiers against Albania and Israel — but says he is willing to step aside before next year’s finals if his involvement is an issue.

The former Manchester United centre-back has played almost 100 matches for Spain and helped them win the World Cup in 2010 and Euro 2012.

He said: “I honestly think I can join up with the national team because I’m convinced there are thousands of people who totally disagree with what has happened.

“I also say that if the coach (Lopetegui) or anyone from the Federation thinks that I’m a problem or a nuisance then I will step aside and leave the national team before 2018.”

1 Flanagan and O’Donovan named in Limerick side to face Galway
2 Keith Duggan: Through the glories and the disgraces, we were all Maradona addicts
3 GAA Statistics: Can Cavan and Thomas Galligan beat Dublin with the long kickout?
4 Level 5 golf shutdown: Ireland one of few countries to close courses
5 If it wasn’t for bad luck, would Stephen Kenny have any luck at all?
Real news has value SUBSCRIBE
Crossword Get access to over 6,000 interactive crosswords