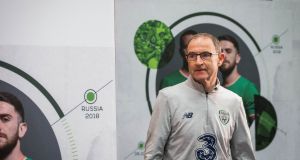 Martin O’Neill has agreed to stay on as Ireland manager for the Euro 2020 qualifying campaign.

The Ireland manager had hinted in his press conference on Thursday morning that he was prepared to stay on and the FAI have now announced that an agreement has been reached.

There has been no official announcement as yet but assistant manager Roy Keane and the rest of the coaching staff are also expected to stay on. While no contracts have been signed as of yet, O’Neill told FAI TV that he has agreed to stay.

“I spoke to John (Delaney) very recently and he said on behalf of the board, they would like to extend my contract for another couple of years, obviously with the Euros coming up and I’ve agreed to do so,” O’Neill said.

BREAKING: Martin O'Neill has agreed a contract extension and will continue as the Republic of Ireland manager for the EURO 2020 campaign! 👏 pic.twitter.com/UAjiKoMGVh

“I’m delighted. I’ve enjoyed it immensely. International football is something I didn’t know if you’d get used to or not but obviously qualification for the Euros (2016) made it all worthwhile.

“And while we’re still in this competition also, but, as you have mentioned, now with some younger players coming through taking over from the old guard who will retire naturally, through old age as much as anything else, I think that it’s an exciting time for us.”

The 65-year-old took over in 2013 and successfully guided Ireland to the European Championships in 2016.

With two games remaining in the current qualifying campaign he still remains in with the chance of being the first Irish manager to reach a World Cup since Mick McCarthy in 2002.

On Thursday morning the Irish manager said he had spoken to John Delaney already about signing a new deal and gave the impression that it was on the table regardless of whether Ireland qualify for Russia 2018.

With a qualification record of, in his own words, “one from one”, O’Neill remains confident that Ireland can beat Moldova and Wales to set up a possible playoff and improve that record to two from two.

“The equation is very simple, we have to win the games,” he said. “The team selection is one part of that and then the players have to play. They need to perform tomorrow night but I think that they are up for it.”