Sideline Cut: Ireland and Denmark have had enough of each other 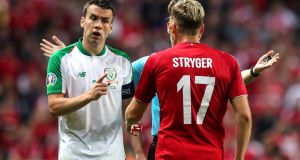 It’s become clear that Ireland and Denmark have had enough at this stage, not just of playing each other at football but of the other crowd in general. The countries simply do not mix.

Ireland v Denmark is (a very tiny bit) like Brad and Angelina in Mr and Mrs Smith. The idea was fine. But the chemistry was not there. And familiarity has bred contempt.

The Danes scoff at Ireland’s limited scope for football skill and imagination, which enrages us because we know it to be true. We regard the Danish obsession with bicycle transport and high-quality-of-life as sinister and even perverse. Plus, we’re still a little bitter about that whole Viking carry on. Did they ever formally apologise for all that beardy plundering and pillage and those ridiculous horned helmets?

No, there’s no love lost. The only thing the countries share in common is the obscene price of a pint of Carlsberg.

On Monday night, the football warriors of Denmark and Ireland will cross paths for the sixth time in less than two years. They have conspired to produce a series of fascinatingly terrible football games.

You can imagine football fans all across Europe scanning the fixtures and, upon seeing Ireland v Denmark, with its promise of a raw-knuckled 0-0 or unenlightened 1-1, sighing and all of a sudden feeling a bit sadder about life.

If the prospect of Manchester City versus Liverpool, say, gets the blood racing at the mere thought of Firmino and Salah in full flow or of a De Bruyne moment causing Jürgen Klopp to go berserk, then Denmark versus Ireland has the power to make the football fan question the very point of existence.

All that Ireland and Denmark can ever offer is a brutal struggle which boils down to a flushed and scowling Glenn Whelan remorselessly tracking an increasingly disheartened Christian Eriksen into oblivion.

Ireland v Denmark is a Beckett play interpreted through what can vaguely be described as football. The whistle blows, the game starts, you squint confusedly through the physical delirium in the hope of seeing the actual ball and then, many, many corners and offsides later, it ends. Usually, there is no winner or loser and very often there are no goals.

The Irish manager will say he is happy with the result – if not the performance. The Danes will politely suggest that Ireland are shit at football – and, by inference, at life in general. Then they will get on their aeroplanes – although the Danes would happily cycle home if we’d only build a few lanes – and hope they never have to do meet us again.

How did it come to this? If it doesn’t seem all that terribly long ago since Martin O’Neill, the former Ireland manager, and Age Hareide, Denmark’s supremo, were sharing warm anecdotes about their years sharing a house together, that’s because it wasn’t. The pair had lived together during their days playing with Norwich City in a house owned by O’Neill.

“He was a good landlord,” Hareide joked one frosty Thursday evening in November 2017, when Copenhagen was all pre-Christmassy and beautiful and Ireland and Denmark chased a place in the World Cup finals in Russia by sharing a 0-0 in the first leg of a play-off game.

It was easy to imagine the scene in early 1980s Norwich: Derry’s O’Neill and Norway’s Hareide, smart lads both making their way in the unglamorous football environment of Maggie Thatcher’s England, lighting a coal fire and enjoying a Friday evening steak and perhaps verbally jousting as they watched Terry Wogan’s Blankety Blank.

But after the return leg in Dublin, when Ireland were unwisely lured into trying to play actual football and were thumped 5-1 by Eriksen, Hareide’s gloating made you wonder just how happy that house in Norwich had been after all.

It’s as if Copenhagen itself has just now taken a Xanex and you’ve happened upon it in a blissed out moment.

The Irish team and fans found themselves back in Copenhagen in November 2018 for the Nations League (Denmark and Ireland’s contribution to the beautiful game was a pair of 0-0 draws in that competition) and again last June for the qualifying game for next year’s European Championships. It finished an extravagant 1-1 stalemate.

And it became clear, over those visits, that it is not in the Irish make-up to ever fully understand or get places like Copenhagen. For a start, it’s one of those cities designed to make life pleasant and smooth for inhabitants, which always makes Irish people jittery and suspicious. Copenhagen is easy to walk around, beautiful in clear summer weather, invigorating in its winter freshness and there is no stressed-out big city edge.

There is no gridlock or traffic congestion. The locals mosey through its boulevards on their bikes, enjoying the luxury of dedicated cycle paths wider than most Irish main roads. Independent boutiques and businesses seem to thrive. The city volume is low-fi and soothing. Half the city’s locals look as though they are on their way to star in a Vogue shoot. And it’s all very chilled out.

It’s as if Copenhagen itself has just now taken a Xanex and you’ve happened upon it in a blissed out moment. Except it’s like this all the time. When Irish people are confronted with a city like this, they feel that there must be a catch or at least some soul-selling involved.

If there is nothing to complain about in a city, then what are people supposed to talk about all day long? How does Denmark’s version of Liveline even work? Do the Danes just phone in to congratulate each other about how wonderful everything is? Where is the fun in that?

And its economics are confusing too: yes, the Danes are in the EU but clearly regard the euro currency as a joke; stuff is mind-blowingly expensive there but that’s fine because they pay themselves barrel loads.

All in all, Copenhagen gives off the vibe of a Scandinavian port city that is doing very well, thank you very much and wouldn’t swap places with you in a million years. They’ve got all the environmentally friendly sandal shops you could ever need, plus they created Christian Eriksen.

It all boils down to the winner-takes-it-all scenario in Dublin on Monday night. Which means it will almost certainly finish 0-0

“Nice place to live” the Irish admit as they leave Copenhagen still mildly traumatised by the price of beer. “But probably not much craic.”

Over the last six games, the Danes have grown weary at being nipped and battered by Ireland’s stout-hearted, defensively-oriented football teams and make no secret of their disdain at Ireland’s football philosophy, an attitude best summed up by Thomas Delaney’s disdainful comparison to playing Ireland as like “trying to open a can of beans with your bare hands”. It’s the kind of criticism that Irish football fans have been making for about a decade. But still. How very dare they and all that? Ireland is our can of beans, at the end of the day.

So it all boils down to the winner-takes-it-all scenario in Dublin on Monday night. Which means it will almost certainly finish 0-0. It has been a strange campaign, with Ireland drifting on, not quite bad enough to be knocked out of contention but possibly not quite good enough to make it through to the finals. There is no surprise that Denmark – well turned out and carbon-efficient – should be standing in Ireland’s way.

And it’s high time to end this. Let them cycle on. Ireland by one goal to nil: the winner coming after a corner and an ugly goalmouth scramble. And then a pact to never do this again for a long, long time.