Kyle Walker ends up in goal as Manchester City draw 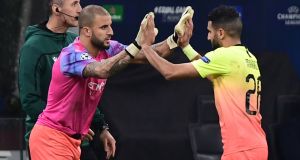 Manchester City remain in control of their Champions League destiny – a point is needed for qualification – but the way they fell away in the second half is hardly a confidence boost for the upcoming meeting with Liverpool.

Ederson, their goalkeeper, was taken off at half-time only for Claudio Bravo to be sent off with 10 minutes left for pulling down Josip Ilicic.

Guardiola made five changes from Saturday’s win over Southampton, notably deciding to leave out John Stones and Sergio Agüero, perhaps with an eye on Sunday’s trip to Liverpool. Gian Piero Gasperini’s side had lost 5-1 at the Etihad Stadium in the reverse meeting and had conceded a competition-high 11, so his team went out in hope rather than expectation.

Atalanta’s Gewiss Stadium in Bergamo does not meet Uefa regulations so this fourth Group C match was staged at the San Siro, and their fans were suitably vocal from kick-off. What they saw was an Ilkay Gündogan error lead to Hans Hateboer being found at the far post. Ederson was stranded but the midfielder failed to find the net.

Moments later he rued the miss as City created an opener of some beauty. Bernardo Silva moved along the left and drilled the ball in to Gabriel Jesus. He backheeled slickly to Raheem Sterling and the forward beat Pierluigi Gollini for his 18th goal of the campaign.

The goal plus Atalanta’s penchant for attacking meant the contest was already open, which suits how Guardiola’s men like to play. Yet for a passage they were loose. Benjamin Mendy spooned a pass to no one, Ederson kicked the ball out of play and Jesus was dispossessed with ease.

This was partly due to Atalanta’s workrate, but when City suddenly pounced they came close to doubling the lead. Gündogan fed Mahrez and his cross from the right rolled before Gollini and would only have required a toe from Jesus – or someone else – to make it two.

Gündogan’s next act was to flick the ball to a galloping Kevin De Bruyne on the right. After advancing he pulled back to Sterling but his attempt was blocked by Hateboer.

Next Sterling was in along the same corridor and when he turned the ball back across goal Bernardo Silva could not quite add the finish. Moments later, Jesus’s strength allowed him to tap on to Mahrez and following a burst of pace plus a drop of the shoulder his effort was saved low down to the left by Gollini.

Despite his side largely cruising Guardiola will have been frustrated at it still only being 1-0 at the interval, especially given what immediately preceded it. When Rafael Toloi pulled back Sterling the defender was booked and the referee, Aleksei Kulbakov, waited for a VAR check on a penalty.

Sterling was adjudged to have been outside the area and no penalty was awarded. But when his subsequent free-kick hit Ilicic’s arm Kulbakov consulted a pitchside monitor and this time awarded a penalty. Jesus’s effort was dismal, however, missing to Gollini’s right.

Ederson was replaced for the second half by Bravo. There was an early test for the Chilean when Ilicic raced in behind, and while this chance came to nothing Bravo would be beaten soon afterwards.

Alejandro Gómez sprinted down the left and pinged a pinpoint cross on to Mario Pasalic’s head and he made no mistake. It was all very simple, and Jürgen Klopp may well have noted how City were breached. Guardiola now hopped around, urging his team to find an extra gear.

Whatever the reason for Ederson’s removal, it unsettled City. Suddenly the home team were spraying passes around and the visitors chasing around trying to regain control.

Hateboer ghosted beyond Mendy and won a corner on the right as the clock moved past the hour mark. From Gómez’s delivery Ilicic’s header flashed wide of Bravo’s left post and City escaped.

City had lost their way and Guardiola acted, replacing Jesus with Agüero. Yet as the end approached his side were hanging on, Kyle Walker thrown on as an emergency goalkeeper following Bravo’s red card. The right-back smiled as he put the latter’s jersey on but relief was City’s overriding emotion as they saw out a draw.