Aaron Connolly ruled out of Ireland plans with groin injury 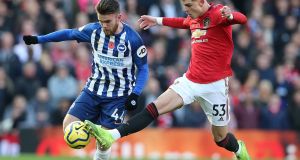 Brighton striker Aaron Connolly is out of Ireland’s two international games over the coming week due to the groin strain that prompted Graham Potter to replace him at half-time in the Premier League game against Manchester United on Sunday afternoon.

At the time, the tone of Potter’s description of the problem seemed to suggest that that the 19-year-old had a chance of making the international games and Mick McCarthy was clearly hopeful on Monday given that the critically important qualifier against Denmark, in particular, was not for another week.

After seeing the results of the scan performed on the player at his club, however, both medical teams have agreed that the problem is serious enough for the striker to be ruled out of both matches, something McCarthy says he accepts.

“Our team doctor Alan Byrne has spoken to the Brighton medical team and had a look at the scans [which] have confirmed the groin injury and Aaron won’t be ready in time for New Zealand and Denmark,” said the Republic of Ireland manager.

Earlier, he had suggested the teenager would be a loss, despite his very limited experience at this level. “The Georgia game, his cameo appearance was by far better than his other appearance in Switzerland, but that could be said of all of us,” he said.

“But you can see what he brings in those 12 or 15 minutes, when he came on [in Georgia]. He’s really added something to the squad.”

McCarthy, who already 27 players in for the two games said he will not all in any replacement.

Connolly’s withdrawal comes after what was generally a good weekend for the Ireland manager with the likes of Darren Randolph, Glenn Whelan and David McGoldrick all involved with the club teams to one extent or another, McCarthy admitted that some of his most established players are unlikely to feature too centrally against New Zealand.

“It’s not that we have to start from scratch and we have to treat New Zealand with the same respect [as any other international team] but it’s a risk playing any of the first team and I haven’t named any of them in the team yet, have I?”

Celtic’s Lee O’Connor, he suggested, will most likely make his senior international debut and Tottenham Hotspur striker Troy Parrott seems set to get game time too.

“I think it’s fair to say that my team has been fairly settled. So is some young lad going to come in and rip it up? We are going to treat the game with respect but obviously it doesn’t have the same importance.”

He would, he suggested, “take care” of Randolph ahead of the qualifying game but others, like Robbie Brady, probably need the run out and the Burnley midfielder seems set to be involved in a significant way.

“Robbie Brady has only has a few minutes so there is a difficulty in balancing it but at least Robbie is in.”

So too is Ciaran Clark, who McCarthy said he was impressed by when he went to see him in Newcastle’s game against West Ham. “He’s not the sort of player that I really need to be going to see but he had been injured and he is back playing.

“He did very well, though Newcastle were brilliant, I thought. They have had some good results and maybe that’s partly down to him.”