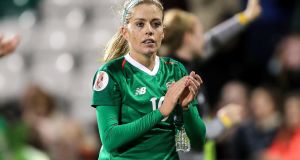 Denise O’Sullivan’s form for Ireland, not least in the opening two games of their qualifying group when they beat Montenegro and Ukraine, earned her the Senior International Player of the Year award. Photograph: Laszlo Geczo/Inpho

Until that injury time equaliser in Athens on Tuesday afternoon, which left Ireland having to settle for a draw in their European Championship qualifier against Greece, Denise O’Sullivan, who won her 75th cap in the game, might well have looked upon 2019 as nigh on perfect.

Her form for Ireland, not least in the opening two games of their qualifying group when they beat Montenegro and Ukraine, earned her the Senior International Player of the Year award, and on the club front she won her second successive national title with North Carolina Courage – and, for good measure, she was voted the champions’ MVP (most valuable player) by her team-mates for the second year running.

“She was the biggest gift we ever got,” he told Equalizersoccer.com. “What a player this young lady is, oh my God. And she’s improved so much, she’s the one player we can’t play without. That’s what she’s become.”

Above all, the 25-year-old Cork woman has been a joy to watch, the quality of her passing, vision and technique, not to mention her work-rate, leaving many of her peers now rating her as one of the best midfielders in the game, among them Scottish captain Rachel Corsie with whom O’Sullivan had a loan spell with Canberra United last year.

“She’s so good in the little pockets with the ball at her feet and she brings others into play,” she said. “She brings the best out of others and I think that’s something very special, not many people have that skill. She is, in my opinion, one of the best midfielders out there, one of the best in the world.”

It says something of O’Sullivan’s resolve that it’s just two and a half years since she left Houston Dash by mutual consent after a hugely frustrating spell that saw her playing opportunities limited, leaving her confidence low. But she has more than repaid the faith North Carolina placed in her when they signed her up, and is now enjoying the finest spell of her career.

Having already won league titles in Ireland, with Peamount United, in Scotland, with Glasgow City, and in the US, with North Carolina, O’Sullivan will hope to add to her collection when she heads for Australia again, this time having signed as a guest player for Western Sydney Wanderers. The Australian season lasts from November to March, which coincides with the off-season in the States, so instead of putting her feet up, O’Sullivan is looking to broaden her footballing education once again.

Her chief target next year will, of course, be qualification for the European Championships with Ireland, a task not made any easier by that draw in Athens, but still achievable. Next up is the return fixture against Greece in March, before three away games, against Montenegro, group toppers Germany and Ukraine. Ireland’s campaign ends next September when Germany visit Dublin.

If they can qualify for a major tournament for the first time, then it would be a fitting stage for Ireland’s playmaker-in-chief. She’d most probably look comfortable in it too.