The ball was burst but is the five-a-side boom on its way back? 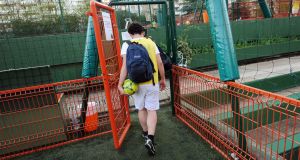 “Most guys just want a game of football, they don’t want to get injured and they want to go into work the following day.”

When the roar of the Celtic Tiger was reduced to the din of a meek feline yawn there was no discrimination. Everybody was affected - every family, every business, every industry.

Like any number of industries during the years of extraordinary economic growth, the five-a-side industry had prospered - grants became available, facilities popped up and people flocked like children spilling through a classroom door and into the freedom of the yard. Like Utopian fountains of youth, everyone returned to their heyday; and yet the steeper the rise, the more painful the fall.

“The downside for us was that every second club, if not every club, was applying for all-weather astroturf pitches,” explains Roy Watson, manager of the Glen Resource Centre in Cork, when asked about the events leading up to the economic downturn. The centre has been offering five-a-side facilities since the turn of the millennium and now boasts seven pitches in total, but like every other business it experienced its own struggles just over a decade ago.

“By the end of the Celtic Tiger the market became saturated, certainly in Cork. But there was still enough demand for us.

“We also found that there were casual bookings from groups of friends that used to book twice and sometimes three times a week, and that trend has changed. We can only put that down, anecdotally, to a number of things.

“Other commitments came up, and certainly the whole culture of drink-driving, we would have seen over the years would have contributed to the bookings insofar as before you would have had people meeting up after work, having a game of soccer and then maybe going somewhere for a drink afterwards - it was a whole social event.”

Unfortunately for facilities such as the Glen Resource Centre, while other sectors are experiencing some positive development, albeit probably not at the levels of two decades ago, business has remained somewhat static since the end of the Celtic Tiger. Recent years have seen initiatives emerge in the hope of injecting some enthusiasm back into the industry; thus far they have yet to ignite a spark. But there is hope.

“We would hate the Champions League nights from a bookings point of view. Once there’s a big game on the television everybody is cancelling their booking. If there was a big game coming up we would know we would be extremely quiet. That trend seems to be continuing more and more.

“You would think because there is more and more on the television that it might encourage more to come out - like when we were younger when Wimbledon was on the TV you would go out with your tennis racket or when the GAA was on the TV you’d go out with your hurley or football - but that doesn’t necessarily happen. So it’s static and we’re certainly not seeing a boom.

“In the boom, as well, you had an awful lot of five-a-side leagues taking place. Certainly in Cork there was definitely three, possibly more, and they came in different forms. That fell off because they weren’t the cheapest to enter and also it was a big time commitment as well. It’s a lot easier to casually turn up.

“We don’t do them now because the difficulty with the leagues from a business point of view is that they want to play their leagues at peak times and they also wanted to book the pitches at a discounted rate. The basic economics of it mean we couldn’t give it. The time we could give discounted rates didn’t suit them.”

At the same time finding a group of 10 or more friends remains a constant problem, though Watson does acknowledge that there are companies making strides to combat this. These kind of initiatives would allow strangers to come together casually for a game, even at very short notice.

It’s an area Dublin Indoor Football is already pioneering at the Soccer Dome in Santry. The company has signed up to a website called Meetup which enables them to advertise free slots for individuals to come and play with other like-minded people, unable to gather enough players to book a pitch.

John O’Donoghue, co-owner of Dublin Indoor Football, claims there are over 1,500 in their social group on Meetup, with around 100 of those being regular customers.

He says: “We actually offer to all our regular guys that if they’re short of players we’ll put it up [on Meetup] and if we put it up at lunchtime we’ll have two or three players guaranteed tonight.

“We have got some guys who play twice a week, one guy who plays three or four times a week. The leagues used to be very, very popular but the problem with the leagues are you could be going out playing against a rough team or a team that plays very, very aggressively.

“We found most of the guys just want to play rather than have these competitive leagues. There was one team that went around playing all of these leagues and they won everything. They specialise in it and they’re going out beating teams by 10 goals. They were semi-professional at it. So we don’t get involved in that. We just provide guys with a regular game of football.

“Meetup is a website for everything - meeting for a pint to watch the Manchester United game, walking the Wicklow mountains, going and listening to music. We have a Spanish-speaking meet-up for Spanish guys who want to play football.

“Most guys just want a game of football, they don’t want to get injured and they want to go into work the following day.”

Dublin Indoor Football, boasting two five-a-side pitches, two six-a-side pitches and a nine-a-side pitch, has essentially found their niche in the market and as a result they’re thriving, catering for all ages and abilities as it happens.

“Fifty per cent of our bookings on any one night would be foreign nationals - it’s a social outlet for them and they’ll stick around and have a chat afterwards.

“On Saturday morning we would have kids from Shelbourne FC academy. We’d also have Home Farm FC on a Thursday night. If all the matches are called off at the weekend we could have quite a few underage teams booking our five-a-side pitches.”

The strategy which involves strangers coming together for a casual kickabout, however, probably offers the best hope of growth for five-a-side businesses going forward. And it looks set to be replicated over coming years, especially with nascent companies beginning to approach a very obvious gap in the market.

Watch the space: the five-a-side boom may just be on its way back.