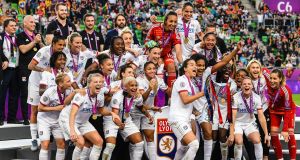 Lyon are going for a five-in-a-row in the Women’s Champions League after their victory over Barcelona in last year’s final. Photograph: Getty Images. 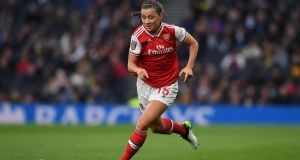 Could Ireland’s Katie McCabe get to the Women’s Champions League final in Vienna next May with her Arsenal team-mates? Photograph: David Price/Arsenal FC via Getty Images.

The idea of purchasing a Champions League final ticket for as little as the contents of a dusty wallet may sound utterly ridiculous. But it can be achieved, the women’s Champions League final in May providing fans with a glorious opportunity to experience a European final without the onerous search for a coveted ticket.

Women’s sport has never enjoyed the levels of popularity it is currently experiencing worldwide and football is no exception. Last summer’s World Cup final saw 57,900 spectators crammed into Stade de Lyon in France. There were 60,739 spectators at the Wanda Metropolitano last March when Atlético Madrid faced Barcelona and, earlier this month 77,768 were present at Wembley Stadium for England’s friendly with Germany.

Viola Park, also known as the Generali Arena, in Vienna will not be able to cater for such an impressive crowd next May for the Champions League final, given the venue can only hold 17,656, but that doesn’t mean tickets cannot be secured now and neither does it require breaking the bank as can be the case with other major European finals.

Will Lyon be there hoping to win their fifth title in a row?

Will Katie McCabe, Louise Quinn and the rest of their Arsenal team-mates be there?

Will Clare Shine and her Glasgow City team-mates make it to the big night?

They’re still working their way to the European showpiece. The rest of us, meanwhile, can sit back with tickets already secured.

Return flights to the Austrian capital currently cost in the region of €134.00, though there are ways of shedding a few quid off the cost of the excursion. For example, return flights with Ryanair to Bratislava in Slovakia come in at €91.00 – this involves departing on Sunday, May 24th, and returning on Monday, May 25th. Bratislava is conveniently located just over the border from Vienna. Furthermore, travelling between the cities is reasonably hassle-free.

There are numerous ways to get from Vienna from Bratislava, some of which cost as little as €1.00 one-way. Should you travel on the day of the game, however, getting the bus from the airport straight to Vienna may be the most sensible option. This should cost in the region of €14.00 for a return ticket, though it’s still a little early to book online. Closer to the time tickets can be purchased on the Flixbus website, https://global.flixbus.com.

Getting to the stadium

Unfortunately, the stadium is a little awkward to get to from Vienna International Bus Terminal. While taxis can be availed of, the weather in Vienna in May can be quite pleasant, with temperatures frequently in the high twenties – ideal for a leisurely walk to the big game. Alternatively you can buy 24-hour public transport ticket for €8.00 - they can be bought here. This is valid on all public transport services, though the subway (U-bahn) is the most convenient way of getting from the bus station (Erdberg) to the stadium (Altes Landgut). This involves switching lines at Stephansplatz.

This is the best part. Tickets for the event can be purchased here now for as little as €8.

Return flights from Dublin to Bratislava, with a return bus fare to Vienna, including a 24-hour public transport ticket in the city and a match ticket: €121.00