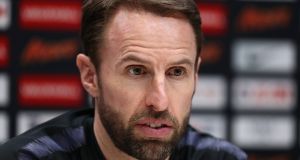 Gareth Southgate during an England press conference on the eve of their international friendly against Italy at Tottenham Hotspur Training Centre. Photograph: Catherine Ivill/Getty Images

Gareth Southgate believes England will find their cutting edge as they grow more accustomed to the fluid style of play being encouraged by the coaching staff, with the manager eager to use the friendly against Italy as a gauge of his team’s development.

There will be a handful of England changes from the win in the Netherlands on Friday but Southgate, who was still contemplating the makeup of his side on Monday night, has suggested the formation and approach will not differ. The side will undertake further shape work on Tuesday morning, with Italy, who will be absent from the World Cup and are under the temporary stewardship of the Under-21s coach Luigi Di Biagio, expected to press more aggressively and test their hosts’ new-found comfort on the ball.

England have kept five successive clean sheets but have managed only two goals in that run, with Raheem Sterling having failed to score for 18 matches and Dele Alli scoring only once in 19 caps despite both being relatively prolific at club level. “There’s two parts to that attacking record, and one is that the level of defending is often better,” said Southgate, who is likely to start with Jamie Vardy up front alongside Sterling in the absence of the injured Harry Kane. “A lot of the teams that we’ve played – Brazil, Germany – you’re playing world-class players. So there’s that element.

“Secondly, the most difficult thing is to score and put the fluidity in the top end of the pitch. What we did on Friday, we started to get more numbers higher up the field: four, five, six in and around the penalty area. We then need to be a little bit more patient in that area of the pitch, wait for that right moment to make the pass, rather than try and force things or force crosses that are going to get cut out. But that will come, again, the more guys play together and they get that understanding of the runs each other make. Then we will create more chances.”

Southgate was impressed with Jordan Pickford’s contribution in the Netherlands but will grant Jack Butland 90 minutes against Italy, with Ashley Young expected to come in at left wing-back and Eric Dier drafted in to midfield. Harry Maguire may not be risked after suffering tightness in a hamstring late on against the Netherlands, and there remains scope for the likes of Alfie Mawson, Lewis Cook or James Tartowski to make their debut.

Kyle Walker is set to remain as the right-sided of the three centre-backs. “There is a benefit to building on what we did, and Kyle has all the qualities to play there,” Southgate said. “If you are playing on the side of a three, the ability to defend in wide areas and use the ball as comfortably as he could, he is in areas that he is used to. Add to that his athleticism not only to defend big spaces and cover the rest of the defence but also his ability to drive out.

“I don’t think Italy will sit back but, if we play teams that do sit back, then those outside centre-backs especially need to be able to drive forward. We’re still learning the nuts and bolts of this system and improving with this system, so it’s important all the players know their roles.

“But we want to build on the performance in Holland. We’ve only played the system a few times but this is a really good test because against the 4-3-3 of Brazil, we didn’t play out of pressure so well. We’ve got to cope with that, got to have the confidence to play and to find the solutions to play through them. We’ve got to try to be more effective in the final third of the field. And also we want to look at a couple of different players and a couple of different options, as we did on Friday. So there’s lots of things you’re trying to get from the game.

“The week up to now has been a real success in terms of the attitude, the approach and the way we’ve trained. We’ve advanced a lot.”

1 CVC cuts Six Nations offer by half to €165m as talks continue on new deal
2 Could lack of sex force players to break the NBA’s bubble?
3 Jack Charlton era made GAA sit up and realise its greatest strength
4 Solskjaer has nothing to say on Manchester City financial fairplay ruling
5 Game Changers: Living beyond fear puts Alex Honnold above all others
Real news has value SUBSCRIBE
Crossword Get access to over 6,000 interactive crosswords