English fans’ bizarre assumptions of superiority have no place 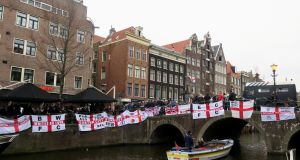 Can a couple of football matches provide evidence that England in the 21st century is a better nation than the Daily Mail would have us believe? In Amsterdam on Friday night England’s seniors confronted the Netherlands with a team whose starting XI contained seven black or mixed-race players, including all three forwards. On Saturday evening their under-21 colleagues played Romania with nine black players in white shirts at the kick-off.

Both teams won their matches using the same brand of football. They aimed to play the ball out of defence with patience, accuracy and positional sophistication. Unafraid to utilise what skills they possessed, they showed composure. If there was no genius visible in their display, at least there was a sense of optimism. It wasn’t going to make headlines around the world, but it was certainly encouraging.

The under-21 match, played at Molineux, happened to be billed as the Cyrille Regis International. Regis would surely have smiled as England’s goals were scored by Demarai Gray and Jake Clarke-Salter. Gray even captained the team for the first time, which would have been hard to imagine in the days when Regis was amassing his unreasonably meagre total of five caps in the early 1980s.

Although Regis enjoyed a fine club career, his international prospects seemed to founder on the widespread suspicion that black players lacked some quality required to succeed at the very highest level. The assumptions made today by Gareth Southgate and his fellow coaches are very different, and those England matches at the weekend were a treat for anyone who cheered in 1978 when Viv Anderson became the first black England senior international or when, 15 years later, Paul Ince became the first black player to wear the captain’s armband. As we saw in last year’s spectacular tournament wins by age-group teams, black players are now a fundamental part of the nation’s hopes for the future.

What effect does this have on the attitudes of those England supporters who attracted the attention of the Amsterdam police over the weekend through their aggressive and eventually violent behaviour? These are the young and middle-aged white xenophobes who take the opportunity of an England match within affordable travelling distance to set up camp in squares and bars, hanging their union jacks and creating little no-go areas for local residents and other tourists, whom they assail with their witless and jingoistic songs, leaving no doubt about their bizarre assumptions of superiority.

They were a familiar sight in the 1990s, less so in the present century. Old modes of unacceptable fan behaviour were largely legislated, policed and architect-designed almost out of existence, or so it seemed, by decisions taken in the wake of Heysel and Hillsborough. The outbreaks of violence in Marseille in 1998 and Charleroi in 2000 were taken to be the last convulsions of a dying phenomenon, doomed by the era of the all-seater stadium, the corporate hospitality suite and the four-figure season ticket.

When a repeat of the Marseille incident at the Euros two years ago turned really nasty thanks to the intervention of a group of particularly brutal Russian hooligans, it seemed at first like a strange anomaly, almost a nostalgic reversion. Then a TV documentary on one of the Russian gangs revealed the preparation and training they undergo, casting a shadow over the anticipation of this summer’s World Cup, at least in English minds.

And now all the worries are back. There was trouble in Dortmund 12 months ago when England played Germany, and in Amsterdam around 100 English fans were arrested following exchanges with the Dutch police. On both occasions the opponents’ national anthems were booed.

The Brexit referendum didn’t cause this unwelcome revival, but it’s hard to imagine that the public rhetoric adopted by one side of the argument hasn’t encouraged and even legitimised in some minds a renewed willingness to demonstrate their lack of respect for foreign cities, their inhabitants and their culture. While the Daily Mail entices readers by offering them models of the Supermarine Spitfire (“the little plane that won the war”), the hooligans are still boasting about winning “two world wars and one World Cup”. They are lured by promises of a return to the glories of empire, which they interpret to include the right to kick out immigrants, particularly those of a different colour.

All of which makes you wonder what goes through their heads when they watch the present-day England football teams. On Friday night the senior team’s goal was scored by Jesse Lingard, followed 24 hours later by Gray and Clarke-Salter scoring the under-21s’ brace. There also were wins for the under-19s, for whom Eddie Nketiah was on target against Latvia, and the under-18s, for whom Ian Poveda-Ocampo scored against Argentina.

These results came on the centenary of the death of Walter Tull, one of England’s earliest mixed-race footballers. The son of an Afro-Caribbean father and a Kentish woman, Tull played for Tottenham Hotspur and Northampton before serving in Italy and on the Western Front as a second lieutenant in the Footballers’ Battalion of the Middlesex Regiment. He was mentioned in despatches before being killed on March 25th, 1918 near the village of Favreuil during the German army’s spring offensive.

Tull’s father, a carpenter, came to England from Barbados, where his own father had been a slave. Cyrille Regis arrived from French Guiana to settle in London at the age of four. Most of the goals at the weekend were scored by the sons and grandsons of immigrants – including Poveda-Ocampo, whose parents are Colombian. In a radical reversal of the position of 30 years ago, England’s football teams are now running ahead of the people they represent.

1 Tipping Point: DeChambeau’s transformation raises questions, but who will ask them?
2 Patrick Mahomes reported to have signed 10-year $400m deal with Chiefs
3 Ken Early: Resurgent United can be the top team – in Manchester
4 Monica Seles: The warrior queen who could have been the best ever
5 Tottenham take the gift of Keane’s own goal and grind out the rest
Real news has value SUBSCRIBE