Captain Coleman back but bearing no grudges 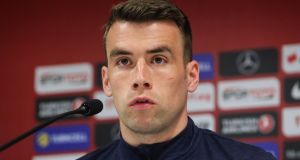 Séamus Coleman: “I haven’t even thought of Neil Taylor five times since the injury . . . If I hold any grudge against him it’s not going to help me in my rehab.” Photograph: Ryan Byrne/Inpho

It’s might seem like the blink of an eye compared to the 10 years and 10 months that Colin Doyle has had to wait for his second cap, but Séamus Coleman’s relief was clear ahead of the game against Turkey. After a long injury-related lay-off that delayed international appearance number 44, Coleman will once again captain his country.

His return comes a day short of the anniversary of the injury, a double leg fracture sustained when Neil Taylor recklessly launched himself at the Irish skipper in the early stages of the drawn World Cup qualifier against Wales. Coleman, however, says he is beyond bearing grudges.

“I haven’t even thought of Neil Taylor five times since the injury,” he said as he sat alongside Martin O’Neill at the pre-match press conference in Antalya. “He played a part in the tackle, and it wasn’t a great tackle. I was going for the ball, he was a bit high.

“But these things happen in a tough international fixture, and if I hold any grudge against him it’s not going to help me in my rehab. He has to get on with his journey and I have to get on with mine. If I hold any anger towards him it won’t help me. Let him carry on with what he has to do, and I’ll crack on myself.”

The 29-year-old’s return comes at an opportune time for Ireland. O’Neill is set to reshape things somewhat as he looks to expand his options ahead of Nations League games this autumn and, beyond those, the next European Championship qualifying campaign. The more mainstays of his side he has to anchor things here, the better, and the ease with which the Everton defender fits into an array of different system should help the manager with his experimentation.

“I’ve played three at the back a few times,” he said as the rest of the squad prepared for their final training session ahead of the game. “I’ve got Theo [Walcott] in front of me at Everton but that’s fine. It’s always nice to have a winger to link up with. So whatever the system you need that. Whatever the manager says I’ll be happy to play.”

The wing-back role might well require more of him physically – although it is not entirely clear-cut given how much Coleman tends to get forward even when there is a wide midfielder in front of him – but he believes he is ready to take it on with, he says, no lingering after-effects.

“Physically, thank God, it’s been okay. I don’t finish training and need to ice it. I would have loved to have been back quicker and played a part in trying to qualify, but that wasn’t to be, and I would have been rushing it. But I’m on track with being back,” he said, before shifting the focus to a player whose road back from a similar setback has involved a great many more twists and turns. “A lot is made of my injury as captain of the country, but Alan Judge has also had a very tough two years, and it’s amazing to see him back. Credit to the manager for showing faith in him.”

Judge might be forgiven for doubting on the darker days that he would ever get back, but Coleman says the idea never entered his head. “It never crossed my mind,” he says. “I knew if I did everything I was told and the work I needed to do in the gym that I’d be back in the football pitch.

“I’m back now for five or six weeks and feel good in the games and hopefully I can do the same in the Irish shirt.”

O’Neill was clear about how much it means to him and the team.

“I sometimes think he doesn’t know himself how influential he is,” said the manager, “not only in the dressing-room but out on the field of play, which is the main part.

“I think it almost goes without saying that we missed him. Had he been fit, I think we may have made it, who knows, but he certainly would have given us a much better opportunity. I’ve said to him, I’d rather say it when he’s not in the room, he’s an absolutely world-class player.

“You talk about someone with a leg break getting back but even when we saw him in the hospital in the first few nights, when he was really down, you felt that with his determination he would get through. That’s just his character. We as a group are delighted, the players are and the management team very much so. If he can stay clear from serious injury, who knows what lies in store for him in the next couple of years.”

1 Kevin McStay: Maybe a knockout All-Ireland Championship is the long-term solution?
2 No further players to be called up to Ireland squad to face Georgia
3 Gerry Thornley: Ireland don’t want to box themselves into a corner
4 Former France and Stade Francais winger Dominici has died aged 48
5 Owen Doyle: Ireland suffered from officiating of the breakdown
Real news has value SUBSCRIBE
Crossword Get access to over 6,000 interactive crosswords