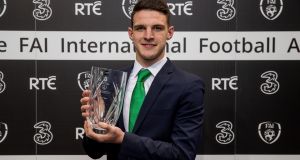 Declan Rice was named the FAI’s Under-19 Player of the Year on Sunday. Photograph: Morgan Treacy/Inpho

London-born Republic of Ireland Under-21 international Declan Rice says there is no question of him switching his allegiance to England, with the teenager insisting his call-up to the Irish senior squad is a “dream come true”.

Rice, who turned 19 in January, only made his senior debut for West Ham at the tail end of last season and admits that he expected to be farmed out on loan for much of this one.

Instead, he has played 24 times for the first team and made 18 Premier League appearances, a run that had inevitably given rise to speculation that the English FA might come calling back for one they suddenly realise is in danger of getting away.

Rice insists, however, that he is and his family are proud that he is playing for the country of his parental grandparents, Margaret and Jack, from Douglas in Cork. His delight at them having seen him play his early underage games for Ireland is clear and he sounds genuinely taken with the ongoing process of new relatives continually coming to light.

“There’s no decision to be made,” he said on Sunday evening after picking up the Under-19 prize at the FAI’s Player of the Year awards. “I’m here now with Ireland at the moment and I’ve been called up by Martin. And if I didn’t want to play for Ireland I wouldn’t be here tonight picking up this award. I’m really looking forward to this week and I’m looking forward to getting to know the boys better.”

England have never wanted me at under-age level, it’s always been Ireland. I’m fully focused on playing with Ireland

Rice, who generally plays in midfield for Ireland’s under-age sides but has been used more as a centre-half by West Ham, insists he is equally comfortable in either role.

He was delighted, he says, to be approached by the FAI’s London-based scout, Mark O’Toole, at a time when his professional career seemed to be in jeopardy and maintains that there has never been any contact from the English FA. If there was, he says, he would have no hesitation in refusing an offer they might make.

“I haven’t had a call from anyone at the FA,” he says. “Not at all. England have never wanted me at under-age level, it’s always been Ireland. I’m fully focused on playing with Ireland. We’ve got an important Under-21 game coming up and if I think about that [stuff] too much, it will start to take me off my football. I let my dad deal with that. Not me.

“To get called up here by Ireland… my nan and granddad are from Cork and they sadly passed away, so for me to be playing now – and they watched me when I was Under-16 – to be playing for Ireland now, they’ll be looking down on me very proud. My family are very happy that I’m playing with Ireland.”

He is too, he insists, and he laughs when asked about throwing himself, with particular enthusiasm, into singing Amhrán na bhFiann before games. “It’s just been from when I’ve been playing since I was Under-16,” he says, smiling. “I’ve probably played over 40 games in all for Ireland since I was a kid. It’s such a good national anthem, it’s so catchy. You know the words straight away.”

At club level, Rice’s progress has been made against the background of the team struggling, and he is desperate, he says, to help keep West Ham in the top flight

Well, he admits, the FAI had someone come in to teach them to the players and he does not understand what they mean but, he says, “I think it’s good that you sing it before the games. It means something to you, it’s passionate. It gets you really fired up for the game.”

At club level, Rice’s progress has been made against the background of the team struggling, and he is desperate, he says, to help keep West Ham in the top flight.

“The fans pay their money and they’ve got every right to not be happy,” he says, when asked about the recent unrest. “We haven’t been performing in recent weeks but I think we’re going to have a strong end to the season, our squad is too good to be relegated.

“For me, as a 19-year-old, I’ve had a lot of experiences this season, both good and bad, and hopefully that will make me mentally stronger as well seeing what’s going on. We have got some tough games coming up but I’m pretty sure the manager and the team will get together and 100 per cent pull through.”

Despite his age, Rice has not looked at all out of place in the Premier League and he admits to taking some pride at being one of the youngest players to be getting significant game time.

He is, he reckons, feeling the benefit now of the work he put in after first being released by Chelsea, the team he supported as a child, and then coming close, it seemed, to be being let go too by his current club. John Terry has, he says, been supportive but when West Ham finally did offer what he realised might be his last shot at a career in the game, he resolved to grab it with both hands.

“I wasn’t the best when I was younger but I worked hard and the talent came through. When I got my scholarship contract, it was 50-50 whether I get it or not. I thought then ‘I’ve got it now, I’ve nothing to lose. This is going to be my job every day. If I give it 100 per cent, I’ll get to the top’.

“I’ve seen loads of players of amazing ability but now they’re playing in lower leagues or some have even dropped out of the game. That saying, where it’s only a small percentage that players who make it to the top, is very true.

“When you’re young you think it’s all set up for you, but it’s not. Now, it could all change for me at any moment. I’ve come away here but I don’t stop when I get back. So far, I’m playing well, playing in first team in the Premier League with West Ham. I’m enjoying it but I’m only 19 and I want to push on.”