Reading and Jaap Stam part ways after one win in 18 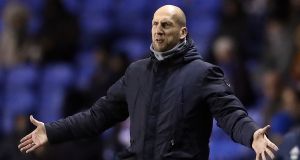 Jaap Stam has left his position as manager of Reading by mutual consent, the Championship club have annnounced. Photograph: PA

Relegation-threatened Reading have announced the departure of manager Jaap Stam.

The former Manchester United and Holland defender led the Royals to the Sky Bet Championship play-off final in his first season in charge.

But, having lost on penalties to Huddersfield at Wembley, Stam has failed to maintain those lofty heights this term and departs the Madejski with Reading in serious relegation trouble.

Reading are currently 20th in the table, only three points above the relegation zone with eight matches remaining, having won just one of their last 18 league matches.

A statement published on Reading’s official website read: “Majority shareholders, Mr Yongge Dai and Ms Xiu Li Dai, had wanted to give Jaap every opportunity to turn around what has been a difficult and challenging Championship campaign.

“Jaap has not wavered in the time, effort and sheer determination he has put in to try to steer the team away from the position we find ourselves in. However, after careful consideration, the decision has been made that a change is now necessary.

“We would like to thank Jaap for his hard work and commitment to the club, in particular noting what he achieved in a memorable first season in club management, and we wish him the very best of luck in his future endeavours.

“We will now focus on identifying and recruiting the right person to take Reading Football Club forward.”

Stam had been hugely positive about the development of Liam Kelly - the England-born midfielder who this week declined a call-up to the Republic of Ireland squad - saying there were elements of his game that bore comparison to Barcelona’s Andreas Iniesta. Kelly qualifies through grandparents from Mayo and Leitrim and has previously played for Ireland at underage level.