Manchester United forward has only featured in seven games this campaign 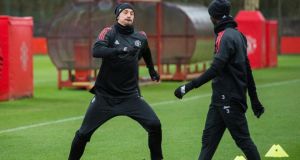 Zlatan Ibrahimovic has left Manchester United after the club agreed to terminate his contract, with the striker expected to join LA Galaxy.

The Swede, who signed for United in the summer of 2016 and had a successful first season at Old Trafford until he suffered a serious knee injury in April, has featured in only seven games in this campaign.

“Manchester United confirms that it has agreed to the termination of Zlatan Ibrahimovic’s contract with immediate effect,” the club said in a statement. “Everyone at the club would like to thank Zlatan for his contribution to the team since his arrival and wishes him well for the future.”

Jose Mourinho said in January that while he had not spoken to Ibrahimovic regarding a possible move to the MLS he would not stand in the Swede’s way should he wish to move before the end of the season.

“If he wants to move to another club or another country, we will try to help him,” the Manchester United manager said. “We will not make his life difficult.”

Ibrahimovic posted a picture on his Instagram page of him dressed in white and arm wrestling with a red devil, in an apparent nod to United’s nickname. He wrote alongside it: “Great things also come to an end and it is time to move on after two fantastic seasons with Manchester United. Thank you to the club, the fans, the team, the coach, the staff and everybody who shared with me this part of my history. foreverred”.

The 36-year-old Ibrahimovic scored 28 goals in 2016-17 as the team went on to win the Europa League. In the summer United bought Romelu Lukaku but Ibrahimovic still returned to the club after agreeing a deal until the end of this season.

United are second in the Premier League and have reached the semi-final of the FA Cup. They were eliminated by Sevilla at the last-16 stage of the Champions League. – Guardian service