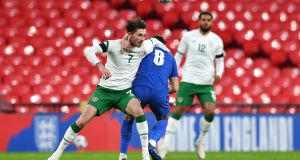 Preston midfielder Alan Browne has become the latest member of the Republic of Ireland squad to test positive for coronavirus. In a brief statement on Friday morning, the FAI said that the player had been isolated from the rest of the group and that the HSE and Uefa had been informed. The association says that there are no ‘close contacts’.

The 25 year-old played all 90 minutes of the 3-0 defeat by England on Thursday and would, if available, be expected to feature in one or both of the forthcoming Nations League games against Wales and Bulgaria.

Ireland manager Stephen Kenny lost two players in the immediate run up to the game at Wembley with James McCarthy withdrawing from the squad for family reasons and Seamus Coleman forced out by the recurrence of a thigh strain.

After the game, Kenny said that the Everton defender would miss both of the Nations League games and that McCarthy’s involvement depended on how his family situation evolved with the manager saying only that the midfielder, whose birthday it was on Thursday, had received “some bad news”.

The squad was already depleted with David McGoldrick having announced his retirement from international football the day it was named, Aaron Connolly injured in training and Callum Robinson testing positive for Covid-19 earlier in the week.

Ireland play Wales in Cardiff on Sunday and Bulgaria back in Dublin next Wednesday. Kenny’s side is under some pressure to win at least one of the games in order to avoid possible relegation in the Nations League and a third seeding in the draw for next year’s World Cup qualifiers.