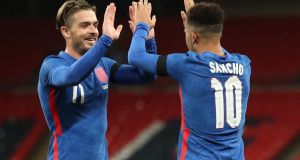 “As an Irish kid you don’t think: ‘I dream of playing at Wembley’”. Aaron Connolly struck that confident tone on Monday, we nodded approvingly, that’s right Aaron, we dream our own dreams now.

By Wednesday Connolly had been ruled out with a hamstring injury, Callum Robinson had Covid-19, we knew David McGoldrick had retired . . . if this was a dream, it was the one where you turn up at school and suddenly realise you left your trousers at home.

Still, there were a few minutes in the first half where we could dream this match was going to go a better way, the Stephen Kenny era bursting into life with a Wembley heist of brilliant audacity, a stunning display by Ireland players as fearless as they were unheralded. A quick interchange slicing down the right, Alan Browne to Daryl Horgan to Callum O’Dowda, the Bristol City player so close to forcing the humbled English to turn to each other uncomprehendingly and ask . . . “Who??”

And yet even those brief moments of Irish promise felt a bit like a brave but ultimately doomed prison break, the players rushing to stay just ahead of their burly interceptors, reaching the ball a fraction of a second ahead of the challenge, nicking it around the edge of a fast-closing defence, having to pull off every move at 95 per cent of maximum speed if it was going to work out. Which it never ultimately did.

Mostly the pattern of the game was England keeping Ireland penned back within 40 yards of their own goal. Irish eyes were unsmiling, and drawn to Jack Grealish. Not so much because of bitter resentment that he wasn’t playing for Ireland, although that was there for sure, but because this is what happens now whenever Grealish plays.

“Presence” is one of those old-fashioned words in sports journalism, the kind of vague descriptor that has fallen from favour because it’s hard to define and quantify - but you know it when you see it. Grealish has it, maybe more than anyone else playing in England right now. It’s a quality that expresses itself in the confidence he has to break into a stroll whenever he receives the ball. He doesn’t need to hurry, because he knows they can’t get the ball off him.

Contrast to the scurrying eagerness of the Irish players whenever they tried to turn a rare possession into an attack. Grealish has the mastery to slow the game down to his pace so he can speed it back up again at a time of his choosing. Players like him are rare in the modern game but more magnetic because of it, and the best that can be said of last night is at least Ireland were able to get a good look at him.

Not that Grealish had much to do with England’s actual goals. Stephen Kenny had spoken in the build-up about the quality of Ireland’s defending in his first five matches, insisting they had not given away many chances. England’s first arrived in a way Ireland manager probably would not have anticipated.

Shane Duffy’s problems this season began with mistakes leading to goals for Bulgaria and Finland, and culminated in his dropping from the Celtic team last weekend. Falling off the tightrope of a high defensive line is one thing, not everyone is cut out to play that kind of football - but losing a header to Harry Maguire in the way he did for England’s first cuts to the quick.

The crestfallen Duffy was soon caught dawdling in possession by Dominic Calvert-Lewin, giving away a corner which led to England’s second goal by Jadon Sancho.

Duffy’s form is such that in normal circumstances Stephen Kenny would be forced into a mercy dropping. However, John Egan was withdrawn with an apparent concussion, so there is no realistic chance of Duffy being taken out of the firing line for the next game against Gareth Bale and friends. It has to be aversion therapy for him, like an arachnophobe being dumped into a vat of tarantulas. Cardiff was at least the site of his finest hour in an Ireland shirt, that 1-0 win in 2017 which featured an incredible 20 Duffy clearances: it seems a long time ago now.

Ireland’s sitting midfielder Conor Hourihane gave the ball away with one out of every three passes, the worst rate of any outfield player, and one of those misplaced passes started off the move that led to England’s third goal from the penalty spot. Hourihane is another whose place must be under threat, with Jayson Molumby replacing him on 70 minutes and looking the better player thereafter.

Past Ireland-England games have passed into song: Joxer Goes To Stuttgart and all that. This one was the kind of London experience Shane MacGowan wrote The Old Main Drag about. The question is, is the pain the sort in which exceptional teams are forged, or just the kind that leaves everyone with a thousand yard stare, jumping at sudden noises, years later still clamming up whenever anyone threatens to talk about it? Ireland have two more games in the next few days to show us; either way the wait for Kenny’s first win goes on.

1 Ireland 23 Georgia 10: How the Irish players rated
2 Ireland’s autumn of discontent continues with abysmal Georgia showing
3 Sordid murder of hurling brothers still resonates in south Galway
4 Jim McGuinness: There is a way to save championship and make it competitive
5 Nicky English: No surprise that Limerick and Waterford in final
Real news has value SUBSCRIBE
Crossword Get access to over 6,000 interactive crosswords