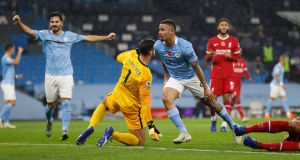 It felt like a trick of the eye. Kevin De Bruyne had aimed his 42nd-minute penalty for the bottom corner and, with Alisson having moved the wrong way, everybody inside the stadium waited for the net to bulge. And then the ball kept going, past the post before banging into the advertising boards.

De Bruyne had taken this game by the scruff of the neck, helping to get Manchester City back on level terms after Liverpool’s fast start, driving his team with trademark craft and energy. He does not take many penalties but when he does, he tends to score them. Only once previously had he missed.

It all went wrong for him this time and, in the final analysis, it would prove costly. City started the day in 12th place, albeit with a game in hand, and they needed the victory more than Liverpool and not because they were at home; the benefit of that advantage seems less clearcut these days.

They needed a victory to claw back some ground on their rivals, who have started the season more consistently, to make a statement as they attempt to wrest back the title from a side whose triumph last time out turned into a procession. They could not get it and the numbers now show that they have made their worst start to a league season since 2008.

Jürgen Klopp had described City as the most difficult opponents in world football but he went for it with his approach at the outset. The major teaser for him had been an apparent either/or up front between Roberto Firmino and Diogo Jota. Klopp picked them both. He wanted bravery from his players and he showed the way with his selection.

With Jota on the right, Firmino pressed high alongside Mohamed Salah in the centre and Sadio Mané on the left, the best way to describe the formation was 4-2-4. It laid the basis for what was a positive draw.

Liverpool started with all guns blazing and their goal came early on when Mané took a pass from Andrew Robertson and sliced in on goal. Kyle Walker misread Mané’s move and found himself in a bad position, on the wrong side, as he tried to deal with him. Walker made contact, the Liverpool winger went down and it was a clear penalty. City were unhappy that Jota had avoided censure for a barge on Raheem Sterling moments earlier at the other end – outside the area – but they could have no complaints about the award of the spot-kick. Salah blasted home for his first goal against a “big six” club in 13 games.

Liverpool had threatened at the very start, with Ederson forced to leave his line smartly to deny Firmino following a ball over the top and Trent Alexander-Arnold creating a headed chance for Mané. The visitors bristled with speed and menace. City dared not lose the ball to invite any transitions. Moreover, they needed to establish an attacking foothold. In the latter stages of a blistering first-half, they did so.

De Bruyne, seeking out spaces from his roving attacking midfield role, was the key figure. He teed up Sterling on 26 minutes with a curling cross after pinching the ball from Gini Wijnaldum only for the City winger to cut inside and see a shot blocked by Alisson. Could he have taken it on first time? Perhaps the angle was too tight.

De Bruyne set up the equaliser with a ball into Jesus, although it was more about how the centre-forward, on his first start since the opening day, outfoxed Alexander-Arnold with a lovely first touch and spin. With his second, he prodded past Alisson.

De Bruyne fired a low shot past the post from distance but it was more costly when he did the same with City’s penalty. The kick was awarded on VAR advice when De Bruyne’s cross struck Joe Gomez. The Liverpool defender’s arm was away from his body – a fatal position in these times.

Liverpool closed out the first half with a slick counterattack that finished with Alexander-Arnold extending Ederson; the City goalkeeper then reached back to grab the ball in front of the line and Jota. The margins were fine; the action was end to end and the passions were best reflected in the touchline gesticulations of Pep Guardiola and Klopp.

The second half was less frantic for one simple reason: the players are not machines. To maintain the tempo of the first was physically impossible. The danger of a blow-out was plain and unfortunately Alexander-Arnold suffered one; he was forced off when he felt a muscle twang in the back of his leg.

The chances became more sparse, although both teams had one after the break. Ederson took the unusual decision to punch clear from Salah’s deflected shot and he was relieved when Jota’s follow-up was weak while Jesus blew a gilt-edged opening on 55 minutes. João Cancelo picked him out but, all alone, Jesus got his angles wrong and directed his header wide. It was not the only moment of profligacy that City would rue. – Guardian