Meeting between Platini, Sarkozy and Qatar prime minister in 2010 comes under scrutiny 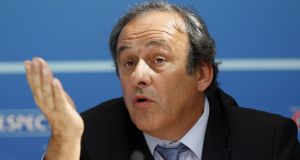 French authorities have opened a corruption investigation into the circumstances that led to Qatar being awarded the 2022 World Cup. Photograph: Valery Hache/Getty/AFP

French authorities have opened a corruption investigation into the circumstances that led to Qatar being awarded the 2022 World Cup. The investigation, which will be led by a judge, follows a three-year operation by prosecutors specialising in financial crimes into the decision in December 2010. More than half of the 22 members of Fifa’s executive committee who voted have since been either accused of corruption or prosecuted for it.

French investigators have particularly focused on the case because of a meeting that took place at the Élysée Palace, the official residence of France’s president, a month before the vote. It was there that Nicolas Sarkozy, France’s president at the time, and two close aides held a lunch with Michel Platini, a former head of European soccer and an influential voter in the choice of World Cup venues, and with Qatar’s prime minister at the time.

Platini claims he was shocked to see Tamim bin Hamad Al Thani, who is now Qatar’s emir, in the room, and had attended only to inform Sarkozy that he had decided to pick Qatar to host the soccer tournament. A spokeswoman for France’s financial crimes prosecutor confirmed the investigation, first reported by the French investigative news website Mediapart, but declined to comment further, citing secrecy rules.

Platini has been questioned twice by the authorities. Most recently he was detained in June, along with the two aides to Sarkozy present at the lunch. Days earlier, in an interview with The New York Times, he said he had done nothing wrong. Qatar has issued strong denials of corruption since the day it was picked to host the World Cup. That has not stopped a string of allegations and claims over how the wealthy country managed to convince Fifa’s board members that it was more suitable than rivals including Japan, South Korea, Australia and the United States, which it defeated in a final runoff vote.

The latest reminder came earlier this month. A Fifa document, outlining a life ban to the former head of Brazilian soccer, included witness testimony from 2018 that alleged three South Americans were paid vast sums for their votes.

“We maintain that we conducted our bid ethically and with integrity, strictly adhering to all rules and regulations,” Qatar’s World Cup organisers said in a statement. While Platini has insisted that he had always intended to vote for Qatar, former Fifa president Sepp Blatter has claimed that was not the case. He has often repeated details of an agreement the two men had to choose Russia for the 2018 event and the United States for the tournament four years later.

Platini said of the lunch in Paris that he was expecting to have a private meeting with Sarkozy and that he was surprised when he found the Qataris had also been invited. “I came to tell him face to face that I will choose Qatar and Russia,” Platini told The Times in June, adding that he immediately contacted Blatter to tell him what had happened. Fifa’s rules, Platini said, meant meetings with bidding nations had to be cleared beforehand.

“After, I called Blatter to tell him I am in big trouble because I have lunch, I didn’t know there were the Qataris at the lunch with Sarkozy,” he added. The French authorities previously questioned Platini in December 2017. Platini, a French former midfield great who won the Ballon d’Or three times during his playing career, was barred from soccer for four years in 2015 after an investigation into a payment of 2 million Swiss francs (€1.8 million) that was authorised by Blatter, who was also barred. Platini’s soccer ban ended in October, and he has vowed to clear his name. Fifa has started legal proceedings to reclaim the money received by Platini.

France’s financial crimes prosecutors have been among the most active in pursuing allegations against Qatar. In a separate case, they filed preliminary charges against Nasser el Khelaifi and Yousef al-Obaidly, the most senior figures at Qatar-based beIN Media Group, on suspicion of bribing officials during the bidding process for track and field’s world championships. Both men deny the allegations. - NYT