‘You have to be raging, angry, not sad. Being sad will not resolve your problems’ 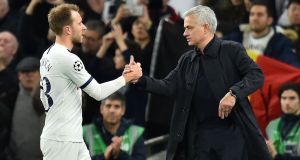 Jose Mourinho will not reveal the outcome of talks he has had with midfielder Christian Eriksen about the Danish international’s future at Tottenham Hotspur. Photograph: Glyn Kirk/Ikimages/AFP via Getty Images

José Mourinho wants to see his Tottenham players “raging” whenever they experience defeat, having been concerned that their reaction to the 2-1 reverse at Manchester United on Wednesday was not intense enough.

The loss at Old Trafford was Spurs’ first under Mourinho, coming on the back of three straight wins since his arrival last month. He detected sadness in the dressingroom rather than anger and, as his side attempt to bounce back against Burnley on Saturday, feels the need for that mentality to change.

“One of the things I said was that I saw a sad dressingroom, a sad plane [on the way home], and that’s not what I like after a defeat,” he said. “You have to be more than that. You have to be raging, angry, not sad. Being sad will not resolve your problems. You need that mentality.

“We have to play and resolve the problems step by step. It’s obvious we have problems, that’s no doubt, but we have players with quality, a great human dressingroom. But we have to change the feeling of being sorry for mistakes and sadness for bad results. We need to be more than that.

“It will come step by step. Since the moment I arrived it’s my team, for good or bad – my responsibility. You will never hear me say it’s problems from the past. It’s my team when we win, my team when we lose.”

Christian Eriksen’s long-term part in Mourinho’s team remains under question, with the playmaker seemingly destined to depart for a fee in January or on a free next summer. Mourinho, who is yet to select the Denmark international in his starting line-up, said the pair had spoken but would not reveal the outcome of those talks.

“But the club is more important than any of us. He is a fantastic player but I have to think first about the club’s interests. I will not tell you what we said. I am perfectly fine if he wants to say but I have to have respect for the player.” – Guardian