Aiden McGeady told he can leave Sunderland in January 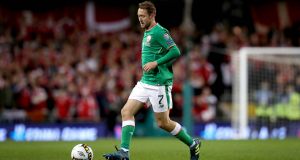 Aiden McGeady is reported to have been removed from the first team squad and transfer listed by Sunderland. Photograph: Ryan Byrne/Inpho

Sunderland manager Phil Parkinson has confirmed that he has told former Republic of Ireland international Aiden McGeady that he can leave the club in the next transfer window.

“We have spoken to Aidy about January and moving on,” said the manager at a press conference on Thursday afternoon. “I feel it is fair to him to tell him now to sort something out.”

Earlier, local media outlets including the Sunderland Echo reported that the Scottish born forward had been involved in a training ground incident this week that had prompted his exclusion from first team training.

Parkinson denied that there had been a particular episode but made it fairly clear that the 33 year-old, who is contracted to the League One outfit until the summer of 2021 after having signed a 12 month extension in July, does not feature in his plans.

“It is not one particular incident,” he said. “It is a decision I have made. I feel it is the best thing for the team moving forward. I wanted to tell Aidy and his agent early enough so we can put plans in place for January as well.

“It is a big decision,” he continued, “not one we have taken lightly. I have given things a lot of thought and I am confident it is the right thing for the club.”

The Glasgow born player who made his name at Celtic before a spell in Russia and an ill fated move to Everton, was said to have been attracting interest from MLS in the summer but McGeady suggested that he was very happy to stay for what seemed likely to be the remainder of his career at the Stadium of Light.

He was a key player for the club last season and a favourite of then manager Jack Ross and while his form has not been so strong over the early part of this campaign he is still the team’s top scorer with six goals, four of them in the league.

Sunderland have not been going well in recent weeks, however, and there were suggestions that his relationship with his under pressure manager had become strained when he was an unused substitute last weekend. He will not, Parkinson confirmed, be a part of the squad for Saturday’s home game with Blackpool and may well have played his last game for the team.

The 19 year-old midfielder featured in the first team’s preseason and made his competitive debut in a League Cup win over Forest Green. He has been on the margins of the Premier league side since and the club have now moved to tie him down well into the future and hope he starts to fulfil his potential.

“I’m delighted that Gavin has signed a new long-term contract at the club,” said Bournemouth CEO Neil Blake. “He has huge potential and has made real progress over the past six months to become a regular around the first team squad. Gavin fully deserved his first team debut earlier this season but this is just the start for him.”