Bayern cruise past Tottenham in Group B dead rubber 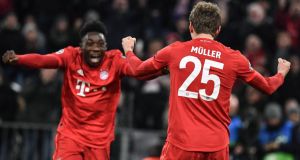 José Mourinho rested key players with Tottenham already certain to finish this Champions League group in second place. The manager had wanted the club’s fringe players to show their ability, to possibly give him one or two selection headaches for the Premier League challenges ahead.

First the good news. Ryan Sessegnon, in his first Spurs start, showed flickers of his pace on the left wing, worked diligently in defence and enjoyed a moment he will never forget when he lashed home the equaliser for 1-1. Sessegnon had plenty of time to feel the hammer of his heart but concentrated purely on the cleanness of the finish. But the positives for Mourinho were hardly abundant and he will have felt a small dent in the momentum and feelgood factor that he had built up over the first five games of his tenure.

Bayern Munich were simply too good. Happily for Spurs, this was not another shellacking to follow the 7-2 in October, a result that served to usher Mauricio Pochettino towards the exit door. But there was the impression that they played slightly within themselves and glaring weaknesses in the Spurs rearguard were still highlighted.

Kingsley Coman, Thomas Müller and the excellent Philippe Coutinho got the goals and Bayern will be intimidating opponents in the knockout rounds, despite their recent domestic struggles. For Spurs, attention turns to the visit to Wolves on Sunday, which will be followed by the home game against Chelsea on Sunday week.

Everything was fixed beforehand in terms of the group permutations, with Spurs knowing that they will be paired with Paris St-Germain, Juventus, Barcelona, RB Leipzig or Valencia in the last 16 draw next Monday. Playing the second leg of that tie away from home will be a big disadvantage in Mourinho’s eyes, but, if Spurs get through to the open draw for the quarter-finals, he feels anything can happen.

Spurs brought precious little intensity to the opening exchanges, which would have irked Mourinho. Bayern were allowed to take a grip, passing the ball around with ease and making inroads up the left flank in particular, where Kingsley Coman advertised his threat and Alphonso Davies also caught the eye.

It was no surprise when Bayern went ahead. They had gone close moments earlier when Benjamin Pavard drew a sharp save out of Paulo Gazzaniga and Thiago Alcântara could not smuggle home the rebound. The goal came when Serge Gnabry’s low cross deflected off Moussa Sissoko and fell kindly for Coman, who beat Gazzaniga with a composed finish. What a shame that Coman would not last much longer, a freak injury, which involved him getting his studs stuck in the turf and going down with a look of pure horror on his face, forcing him off.

At 1-0, it was possible to fear for Spurs. Apart from one Sessegnon burst and shot, they had offering nothing. But they were visibly settled by Sessegnon’s equaliser, which followed a ball from right to left from Giovani Lo Celso that deflected on its way through to Sessegnon. The 19-year-old was confronted by Manuel Neuer and it was quite the moment for him. The feeling when his shot ripped past the World Cup winner at the near post must have been priceless.

Spurs might have led on 33 minutes had Sissoko not fluffed the final ball when gloriously placed but they always looked vulnerable at the back. Too often they were hesitant while the space that they allowed on their right flank was the worst kind of generosity.

They rode their luck when Alcântara somehow missed an open goal after Gnabry’s shot had come back off the post but they soon fell behind again. Gnabry’s cross deflected off Toby Alderweireld, Davies’s shot hit the post and Thomas Müller, on as a substitute, stabbed home from close range. The damage at half-time could easily have been worse: Philippe Coutinho’s shot from 25 yards came down off the underside of Gazzaniga’s crossbar but did not cross the line.

Bayern’s interim manager, Hansi Flick, had started with Robert Lewandowski on the bench even though the month-long Bundesliga winter break will begin for his team on Sunday week, yet his lineup still bristled with quality. The assurance of Alcântara and Coutinho in possession is always a joy to watch, while the threat from wide areas was pronounced.

One of Mourinho’s laments has been the lack of time he has had with his players, how he must develop his style “while we are running”. It felt very much like that here, with Spurs lacking cohesion. Eric Dier and Sissoko struggled to set any kind of tone in possession from central midfield.

The atmosphere was subdued for long spells and Bayern were strolling again from the beginning of the second half. Mourinho felt the competitive juices take over and he readied Son Heung-min as a substitute. But Bayern were 3-1 up by the time he got on courtesy of the goal that Coutinho deserved. The Brazilian dropped his shoulder and, with Sissoko not tight enough, bent a beautiful shot into the far corner from the edge of the area. - Guardian