Liverpool back calls for inquiries into migrant worker deaths in Qatar 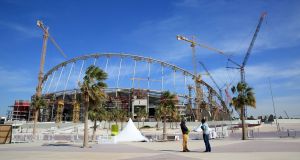 Building works during the construction and refurbishment of the Khalifa International Stadium in Doha. Photograph: Getty Images

Liverpool have supported calls by human rights groups for thorough investigations into the deaths of migrant workers in Qatar, before the club flies to the Gulf country next week to play in Fifa’s Club World Cup.

The Liverpool chief executive, Peter Moore, has also sought assurances from the Qatar “supreme committee”, which is organising the tournament and the 2022 World Cup, about the progress of investigations into the deaths of two men who had been working on the construction of football stadiums.

Moore set out Liverpool’s position in a letter to Nicholas McGeehan and James Lynch, directors of the Fair/Square human rights organisation, who asked him in November to make a public statement of concern about workers’ rights and deaths in Qatar.

They highlighted the risks of the intense heat and humidity for people employed on the vast construction projects in the Gulf, citing medical research published in July into deaths of Nepalese workers in Qatar, which concluded that “the increased cardiovascular mortality during hot periods most likely is due to severe heat stress”.

McGeehan and Lynch specifically highlighted the death in June of Rupchandra Rumba (24) a Nepali who died in his lodgings during his period of employment as a scaffolder at the Education City stadium, which was originally designated for Liverpool to play their matches. Rumba’s Qatari death certificate, as is common in the country, attributed his death to a generalised “acute cardio-respiratory failure due to natural causes”, which McGeehan and Lynch described as “not a certifiable cause of death, meaning that Rumpchandra’s death remains unexplained”.

McGeehan, formerly Gulf researcher at Human Rights Watch, and Lynch, previously a deputy director at Amnesty, have called for full investigations into the deaths in Qatar and the effects of heat. They cited the climate data and conclusions of medical experts, reported by the Guardian in October, that hundreds of migrant workers are dying in Qatar every year due to heat stress.

In his reply, Moore said that Liverpool had “sought background detail assurances” from the supreme committee about the status of the investigation into Rumba’s death and the progress of compensation for Rumba’s wife, Nirmala Pakrin, and their six-year-old son, Niraj.

After Liverpool’s designated venue was moved to the Khalifa International stadium, Moore said they had also discussed with the supreme committee the ongoing investigation headed by Sir Robert Akenhead into the death in January 2017 of the British construction worker Zac Cox, who fell from rigging at that stadium.

“Like any responsible organisation, we support your assertion that any and all unexplained deaths should be investigated thoroughly and that bereaved families should receive the justice they deserve,” Moore wrote in his reply to McGeehan and Lynch.

“Furthermore, we also believe that employees should be treated with fairness and respect, which is why we adhere to our own anti-slavery policy and why we are committed to paying the real living wage, among various measures of this kind. These are the standards that we set for ourselves and by which we would hope to be judged given they fall within our own remits and responsibilities.

“Nevertheless, we remain a sporting organisation and it is important that we are not drawn into global issues on the basis of where our involvement in various competitions dictates that our fixtures take place. So while we respect and understand the reasons why you have sought a public pronouncement from us, we hope you will respect and understand why we feel such a course of action would not be appropriate.

“Having already stated that while we do not visit any country with the objective of bringing about change, but any resultant positive changes would be welcomed, I would like to take the opportunity to reiterate that particular message.”

McGeehan told the Guardian that he welcomed Liverpool’s intervention: “In their detailed expression of support for investigations into worker deaths and compensation for families, Liverpool have demonstrated more clarity of thought than Fifa and all of their sponsors put together,” he said.

1 Shock at golf clubs as sport faces shutdown in Level 5
2 The biggest game in their history? Ireland women v Ukraine - all you need to know
3 Dan Martin toasting another stage win at the Vuelta
4 Dan Leavy could make Leinster return against Zebre
5 Level 5 golf shutdown: Ireland one of few countries to close courses
Real news has value SUBSCRIBE
Crossword Get access to over 6,000 interactive crosswords