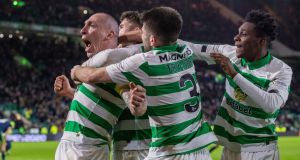 Scott Brown’s dramatic added-time strike gave Celtic a 2-1 win over Hamilton at Parkhead and put daylight between the Hoops and Rangers at the top of the Scottish Premiership.

Attacker Ryan Christie pounced to score from close range in the 13th minute – his fourth in three games – but the home side were far from their best.

A dogged Accies side continued to make life uncomfortable for Celtic and it looked like they would snatch a point when substitute Marios Ogkmpoe bundled in an equaliser in the 89th minute.

However, in the second of three added minutes, skipper Brown fired in a drive for a crucial victory.

With Rangers letting a two-goal lead slip to draw 2-2 with Aberdeen at Pittodrie, Celtic are now two points clear of the Light Blues ahead of their Betfred Cup final meeting at Hampden Park on Sunday.

Celtic extended their winning run to 11 games in all competitions thanks to veteran midfielder Brown and, although Accies have now gone nine without a win, boss Brian Rice will have been encouraged by his side’s spirited performance.