Fifa to sue Sepp Blatter and Michel Platini to get back €1.8m 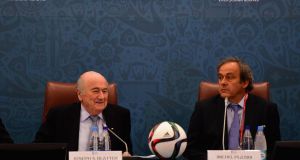 Fifa is preparing to sue its former president Sepp Blatter and the former Uefa president Michel Platini for a return of the 2 million Swiss francs (€1.8m) paid to Platini in 2011, which led to the long bans from football for both men.

Fifa’s governance committee passed a resolution last month that because the money had not been repaid, despite it having been ruled an “undue payment” in proceedings of the ethics committee, Fifa should initiate legal proceedings.

Blatter and Platini, the former France international who was considered his certain successor as the Fifa president before his fall, were banned from football in December 2015 for eight years over the payment. The punishment was reduced on appeal to six and four years respectively. Both men had said the payment was made under an oral agreement, outside the terms of a written contract, from Platini’s time working for Fifa, which had ended nine years earlier in 2002. That explanation was rejected by Fifa’s ethics committee, which considered it had no basis in contract and was an illicit “gift” or “undue payment” according to the ethics code.

Fifa’s governance committee stated in its resolution that as well as the outstanding 2m, Platini has not paid the fine imposed on him, which was reduced to 60,000 Swiss francs from 80,000 by the court of arbitration for sport, nor legal costs of 22,000.

Both men appealed their bans to Cas, which upheld the finding that the 2m payment was not contractually valid, the three professors of law in Platini’s case noting that they were “not convinced by the legitimacy of the … payment”. Platini and Blatter have continued to maintain they did nothing wrong and on the eve of Fifa’s congress in Paris in June, Platini told the Guardian he is taking a series of legal actions relating to his ban, including at the European court of human rights.

A criminal investigation into the payment announced in September 2015 by the Swiss attorney general has not produced any charges, nor formally concluded, the committee said. Noting that any claim for return of the money expires under Swiss law at the end of this month, the committee, chaired by Mukul Mudgal, a retired Indian high court judge, unanimously recommended that Fifa’s administration begin proceedings to have the money repaid.

1 Gordon D’Arcy: If South Africa moves up north, it could all go south
2 Matt Doherty ‘pleasantly surprised’ by Jose Mourinho’s sense of humour
3 Charlesland Golf Club set to close permanently in December
4 Dundalk versus KÍ in the Europa League: TV details, kick-off time and more
5 South African franchises could join Pro16 by next March
Real news has value SUBSCRIBE
Crossword Get access to over 6,000 interactive crosswords