FAI to hold emergency general meeting to introduce limits on board 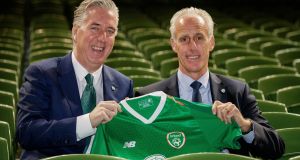 The FAI are to stage an emergency general meeting in February to introduce term limits on their all-powerful board.

Seven of the FAI’s 11-person committee, including chief executive John Delaney, could be affected by the restriction depending on the transitional period chosen to enact the state-driven reforms.

Minister for Transport, Tourism and Sport, Shane Ross, mandated Sport Ireland to ensure that major bodies were compliant with the Governance Code for Community, Voluntary and Charitable Organisations by 2019.

An integral element of those guidelines is the restriction of service by directors to ensure “board renewal” and “succession planning”.

Directors should serve no more than three years per cycle, up to a maximum of three terms. That nine-year ceiling presents the FAI with a challenging period for implementation.

Delaney is a director since 2001 while four others, Eddie Murray, Paraic Treanor, Michael Cody and Jim McConnell, are into their 15th year of directorship.

Donal Conway, elected on a four-year term as President at the annual general meeting in July, is just a year behind and League of Ireland Chairman Eamon Naughton also surpasses the limit.

The FAI confirmed last night insisted it would complete what Sport Ireland describe as their ‘journey to compliance with the Code’.

“The FAI will be compliant with the Code by February 2019, after it puts proposed changes regarding term limits for Directors to its members at an EGM,” an FAI spokesman said.

“The proposed rule changes will include measures for succession planning.

“The association established a Governance Committee, consisting of the company secretary and two external people, to review the Code and ensure that the FAI will be fully compliant by 2019.

“The Governance Committee has already introduced a number of policies and will propose further amendments to the FAI Rules as it continues to look at other ways to improve Governance of the Association.”